Welcome to our new weekly I-5 High Five, a look at restaurant news from up-and-down the Pacific Northwest corridor. 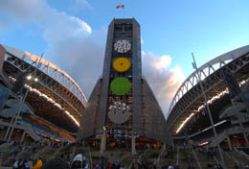 SEATTLE: The Field Formerly Known as Qwest (now CenturyLink Field) has refreshed its menu for the Seahawks' home opener Sunday. The big news: a gluten-free menu. Also, some street food-inspired additions, like Asian tacos, and new health-conscious items that actually sound quite lovely... if you can get past the fact that you're eating a fruit cup at a football game. [ESEA]

SEATTLE: 'Tis the season for new restaurant projects. If you're headed up to Seattle in the coming weeks, two high-profile Asian projects are opening within blocks (and within days) of one another on Capitol Hill. Consider checking out sleek Cantonese/Hong Kong-inspired Bako, or kaiseki and sushi haven Momiji, both shooting for the first week of October. Meanwhile in Georgetown, highly respected local sushi guru Hajime Sato has opened Katsu Dog, a Japanese burger stand that replaced a ground beef patty with tonkatsu, a breaded and fried pork cutlet. [-ESEA-]