Share All sharing options for: Ken Gordon Trots to Golden Horse for Take-Out 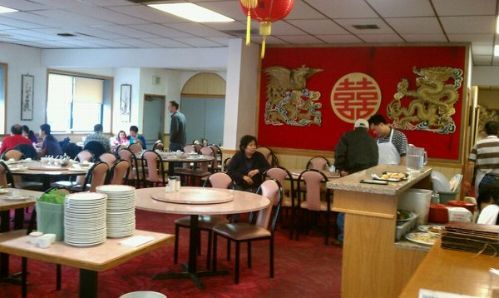 A New York City native, Ken Gordon turned a childhood love of food into a widely traveled and wide-ranging career as a chef. Since arriving in Portland in 1991, Gordon has opened several gastro-hotspots including 28 East, followed by take-out shop Ken's Home Plate, which morphed into the bistro-ish Ken's Place. In 2007, Gordon and Nick Zukin opened Kenny and Zuke's Delicatessen on SW Stark, which Gourmet once called one of the top 10 delis in the country. So where does this deli dude go to get his grub on? Like any real New Yorker, a classic Chinese restaurant, of course.

Though Portland isn't known for having great Chinese food, I've found that most Chinese restaurants do have enough dishes they do well to be able to put together a pretty good meal. Our go-to place for years — usually for take-out but sometimes eat-in, which is always better — is Golden Horse at the corner of 4th and Everett in Chinatown. Bare-bones decor, decent service, predominantly Chinese clientele, big portions, sketchy bathrooms, and late hours — just about the classic Chinese restaurant experience. We always get the sizzling salt-and-pepper shortribs, which are terrific. They tend to do really well with fish, as exemplified by their whole fish preparations, especially the steamed cod with ginger and scallions, but their salt-and-pepper squid is great. And some of their best dishes are their vegetables — they do a greens dish with something called Ong Choy, a seasonal thing, best done with garlic sauce, and their green beans are perfectly done, as is their garlic spinach. Much of their menu is just okay, but the things they do well really hit the spot. Our family running joke is that when you call ahead to order take out, they always say it will take 20 minutes. No matter that sometimes it's 10, sometimes 35. Always '20 minutes.'