Welcome back to our new weekly I-5 High Five, a look at restaurant news from up-and-down the Pacific Northwest corridor. 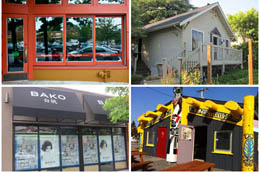 SEATTLE: Should you be heading north for the weekend, Eater Seattle concocted its own brunch heat map for your morning-after dining pleasure, and a massive list of fall restaurant openings to watch. But here's one place that you definitely don't want to visit. [-ESEA-]

BELLINGHAM: Boundary Bay Brewery makes some superb beers, but they're rather hard to come by unless you make the trek northward. However, the brewery has announced expansion plans that will up its brewing capacity and make Boundary Bay's wares available as far south as Portland. [B'ham Herald]

ORCAS ISLAND: Seattle Weekly critic Hanna Raskin spends a lot of time covering buzzy new places, but this week's review unearths a restaurant in the San Juans that's a legitimate secret. Chimayo is hidden away both on the Internet and literally in the back of an arcade. It was originally a Tex-Mex joint, but the menu has stealthily gone Italian. Showstopping Italian, to be precise. [Seattle Weekly]

VICTORIA, B.C.: Taking I-5 across the border, Vancouver toasts the Art of the Cocktail conference this weekend (from October 1-3), with several liquored-up tastings and seminars accessible to the public. (Portland's own Jeffrey Morgenthaler hosts a seminar about barrel-aged cocktails on Sunday, Oct. 3, while a competition to crown the "Best Bartender in the Pacific Northwest" kicks off at 6pm the same evening.) Tickets still available here. [EaterWire]