On Plundered Pork Rinds and Plungers at Grain & Gristle

Share All sharing options for: On Plundered Pork Rinds and Plungers at Grain & Gristle 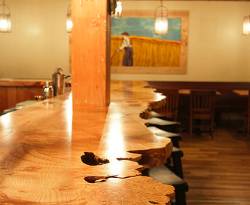 When opening his NE Prescott bar Grain & Gristle a year ago, chef/owner Ben Meyer had items he expected to go missing — like mason jars, decorative gourds, and jars from the spot's wall of canned veggies (indeed, "people have grabbed whole containers of [bottled] pork rinds," Meyer says). But the most surprising recurring theft? A less-than-elegant bathroom apparatus that consistently goes missing:

"The thing that's been the most bizarre: Three times now, the plunger from the bathroom — gone. And no one can figure out where it went or how someone got out with a plunger. Or what they would want it... I can think of a few reasons why they would want it, but none I want to assign to our customers. Three times now. There are other things that have disappeared, but I think the plunger is the most unique one. If it were just once, I would have written it off — oh, it must have broken and someone threw it away. But three times, it's like someone is coming in here for plungers. I hope [it's the same person]. I hope we have one freaky customer and not multiples — not three."

Have a restaurant theft story to share? Whether you're the victim or perpetrator, send it here.