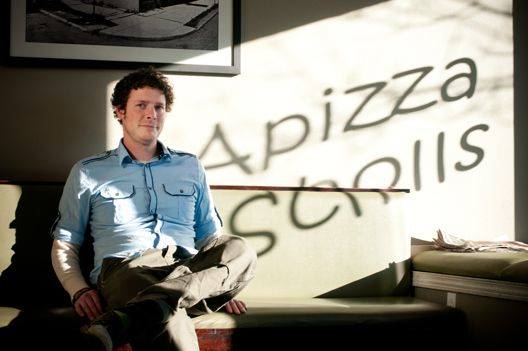 Floor manager Alex Volpe, a six-year veteran of Brian Spangler and Kim Nyland's Apizza Scholls, worked his way up from a part-time dishwasher to the head of FOH. In that time, Volpe's seen Apizza double its dining room and field constant comparisons to other famous pizza joints. "One of the misconceptions about Apizza Scholls is that we're always jam-packed and crazy," Volpe says. "The wait can be very long, but the wait isn't always very long. This time of year, you can come in at eight o'clock, and come right in." He pauses. "That's not to say that's always how it is." So. To navigate Apizza's famous lines, Eater chatted with Volpe about wait times, running out of dough, and yes, a new reservation policy coming soon.

What's the busiest time for you guys — the hardest time to get a table?
It's kind of hit and miss, but probably the worst time to come into the restaurant is 5:05pm on a Saturday. We've just opened, typically we've filled up and have a wait list going, so the first available table is minimum 45 minutes. If we fill up and form a line on the wait list — and you're at the back of that line, you're looking at an hour and 20 minutes, an hour and a half.

So tell me about the reservation policy — or specifically, the lack of.
When we opened up this location, we were just the west half of the building. We expanded over to this half, so effectively doubled our seating capacity — but didn't change our kitchen capacity whatsoever. So, that's the limiting agent in the equation. We can only churn out so many pizzas in so much time... The current policy we have is one reservation per night for between eight and 12 people. Generally speaking, reservations tend to be diners who are looking to spend more time — so we haven't [taken on more] thus far because we have a limited capacity of what we can churn out in a given night. That said, we've been trying to accommodate people as best we can.

Actually, in the next month or two, we're going to be shifting towards a more diverse reservation policy. We're going to pick up OpenTable and try to be able to accommodate some smaller groups. It's not going to be the entire restaurant, but we're going to try to have a dedicated portion to cater to those customers, people with families, people who are short on time who want to be able to get in and get out. We're trying to change in that direction just to be more flexible on all fronts.

Does the limited dough situation factor into that? One of the things you probably hear all the time is, "If you know you're going to run out of dough, then why don't you just make more?"
That's one of those things that, you walk into a restaurant and a lot of things may not make sense. But part of our lease stipulates that we're done with production [at a certain time] because there's apartments above us. So it's a little bit of that, and our dough capacity. We do a 20-hour fermentation, so it's not like we can whip up another batch on the fly. It's sort of a double-edged sword. On one hand, it makes for what we think is a really great dough; on the other hand, yeah, you might run out sometimes.

Is there anything I can do to make my wait shorter?
Some nights you have that perfect storm of every table is sitting and chilling out, and that 45 minutes you were quoted becomes an hour. At that point, we always tell our customers, We're not going to ask people to leave, and we'll extend you the same grace when you're sitting down and eating. If you want to take two hours for your meal, you waited, it's your table. One other thing: Sometimes it helps to have a little faith when we say it's going to be 45 minutes, we're pretty good about that timing. If you ask every five minutes how much longer the wait is, you're probably making that wait time a little longer because you're keeping people from doing what needs to be done to turn over a table.

Have you had to deal with outrageous requests on guests?
We've had some people request reservations on specific days, because they "can't eat pizza" on this day. Every now and then, you get the "Can you stick a candle in this pizza? It's so-and-so's birthday." That's a fun one. We had one customer with a reservation request to come in a few hours before we opened to decorate the back room. It didn't seem too crazy, but then they brought their own dishes, their own cutlery and stuff — so it was kind of a nightmare making sure that it didn't get into our rotation. But we rolled with it, and it worked out pretty well.

As you mentioned, everyone has an opinion about pizza. Do you overhear lots of dining room chatter comparing Scholls to other spots — Ken's Artisan in particular comes to mind.
Back maybe three years ago, you heard that conversation a lot more, when we were a little younger and Ken's was a little younger; people were making up their minds. At this point, we're both relatively well-established in the Portland pizza scene, but you do still get it. But we've gotten enough national attention that you start hearing comparisons — you know it's going to be an interesting conversation when it starts off with, "Let me say, I'm from New York"... and people talk about places like Grimaldi's or Patsy's, or places in New Haven, Connecticut. Right now, the big buzz one is Pizzeria Bianca in Phoenix. Our diehard customers are diehard pizza people, and they will go to different states to try pizza. They always come back and give us their comparison. Generally, a lot of people go, "It's different. It's very good, but it's different." Which I think is great.

Let's say you're serving a first-time guest: What are the must-eats on the menu?
For a first-timer, assuming they're going to get one pizza, I always [recommend] a half-and-half — the margarita, a very simple, plain pie with garlic and basil, is a great jumping off point. And for the other half, I always recommend something equally simple but on the other end of the spectrum, the tartufo bianco. It's a white pie, not with the white sauce but with all the cheeses, no red sauce, with truffle oil out of the oven... When I worked in the kitchen, the smell of truffle oil, being around it that much, put me off — but now, being out on the floor, I definitely drop that pizza off a couple times a night and just wanna take a bite out of it.