In this pre-weekend Friday Opening Report, two new spots that sound way too much Portland: 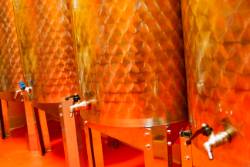 NORTHWEST ALPHABET: The Oregonian reports that Lion Heart Kombucha, which has been available wholesale in Portland since 2008, has opened a retail shop on NW 17th and Lovejoy. Owners Jared and Amanda Englund will sell their fermented tea from the space on Thursdays through Saturdays, 11am-6pm, and a grand opening celebration on January 28 promises free kombucha tastings, for the uninitiated. [OregonLive]