Gorham's Toro Bravo Cookbook: The Making, Breaking and Riding of a Bull, is slated to hit stores in fall 2013, promising more than 100 recipes and essays about the inner workings of the popular NE Portland tapas spot, as well as musings about Gorham's frequent travels to Spain. Also, according to a press release that highlights the "fiercely independent" nature of both chef and publisher, "if you pick up the book this fall you'll get to see John Gorham's ass." 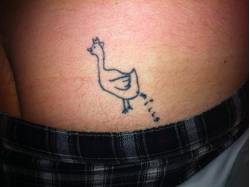 You're welcome, Portland. (Someone had to do it.)