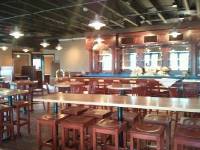 Yet another brewery makes its debut in the Portland metro area: According to its Facebook page, the long-stewing Beaverton outpost of McMinnville's Golden Valley Brewery soft-opened earlier this week, with grand opening festivities scheduled for Monday, January 23. Golden Vallery Brewery, in downtown McMinnville since 1993, is owned by the same couple behind wine country's Angus Springs Ranch. Hours of operation: 11am-10pm, Monday-Thursday and Sunday; 11am-11pm Friday and Saturday. [Facebook via PortlandFood.org]