Share All sharing options for: Taxidermy Pheasant Plucked from Dig A Pony's Piano 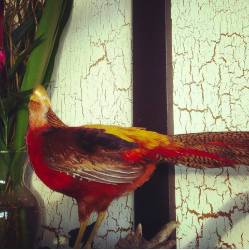 Eastside hotspot Dig a Pony has been open for just seven months, but in that short amount of time, several items have disappeared from the bar's swank interior. "We've had our books stolen, some little things here and there — plants, and other little knicknacks that would fit in an evening bag, or under a big sweater," says co-owner Page Finlay. But a recent Saturday night theft saw Finlay hit Facebook to appeal for the item's return — after all, if you owned a taxidermy pheasant nicknamed "David Bowie" for his yellow '70s rocker mullet, wouldn't you want it back?

I bought it at an antique store in Montavilla called Monticello Antique Mall. I go there all the time and passed it up three times because it was a little pricey, but finally I couldn't stand it and had to have [it]... We put it on top of our piano, and it was just meant to go there. It filled in that spot so beautifully. The piano itself is 120 years old, so we didn't want to drill into the piano to affix it, but we always put candles on his little stand — basically, whoever did it was pretty calculating and had to go to great lengths to move a lot of [other] things to take it down. Not only that, it was a foot tall and probably three feet long, and they ripped his tail feathers off when they took it so it [wouldn't be] as large — which pissed me off even more, because it kind of defeats the purpose. Now it must look like some weird psychadelic chicken. I know it was there for most of the night, because I removed a few drinks from the top of the piano... but later in the night, I went back over to that area and saw just the tail feathers that had been left over. No specific person really stood out, but it must have been someone that had seen it and knew what they were doing.

In their Facebook appeal, the Dig a Pony team writes that "if you happen to visit someone's home and spy a gorgeous yet ass-less pheasant please know that it was stolen from us."
· Dig A Pony [Official site]
· All Previous Shit People Steals [Eater PDX]