Share All sharing options for: Aviary's Co-Owning Trio on Their Tumultuous First Year 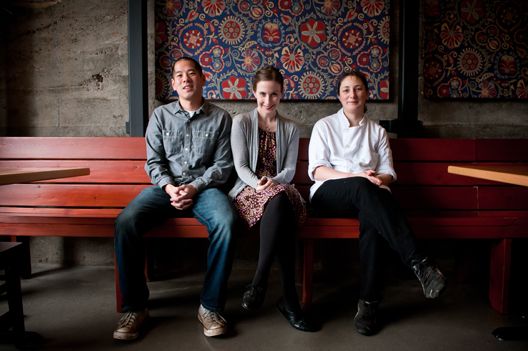 The three friends/chefs/co-owners behind NE Alberta's Aviary haven't had your average first year in business. After opening to foodie fanfare in January 2011, a Fourth of July fire effectively shuttered the restaurant for five months — during which time Sarah Pliner, Jasper Shen, and Kat Whitehead found temporary cooking spaces in the form of benefit dinners and local pop-ups. "It doesn't feel like we're one year in — it feels like seven months," Shen says. "Because of the fire, the break, and restarting again — we were joking last night, it's like opening two separate restaurants, like opening twice in one year."

With Aviary's recent re-opening (and the debut of a new, post-fire bar), the trio are back in the swing of things. "We'd gone through the scary process of opening and building a business and we had finally figured out how to make that space work," Whitehead says. "And then to take on this unknown factor and than going through the whole process of how to make the bar work..." Again, not the average first year. Eater recent chatted with the trio about early chef support, Portlanders' New York perceptions, and upcoming plans for the summer.

Thinking back to the initial planning stages: What made this space and being on Alberta appealing to you?
SP: Alberta the street really reminded us of parts of New York; it's so active and lively, and more diverse.
JS: We liked it up here, felt that it was a more upcoming kind of street. Our other option was a place on Powell, that we were arguing to take as a turn-key — which would have been a lot cheaper. Looking at it now, driving by it...
SP: That we even thought about it was ridiculous.

So let's talk about the opening. I feel like from the second you guys opened, the accolades started rolling in.
JS: [Laughs] I don't know that we feel that. I felt it took us a while to get our feet on the ground, with the style of food we're doing — and especially on Alberta, which is a little more low-key. I don't think a lot of people understood what we were doing. I think people had to come in, try it, be reassured by Eater and other people in the food industry. In the beginning, we got a lot of food industry people — a lot of chefs, we got a lot of waitstaff, and cooks who had heard about us and were really interested. And they were all excited. It took us a while to get word of mouth around.
SP: You can't just survive on foodies and industry people. You need normal people to come in — that's what took a little while. From the beginning, we felt a lot of support from chefs and other restaurant people. Gabe [Rucker] came in, he told everyone to come here. Naomi [Pomeroy] came in and told people to come here — and we'd get actual tables that said, "This person told me to come." That meant a lot to us.
KW: It was huge. We literally had nights where we thought we were going to be slow, and people starting showing up, saying "Le Pigeon was full, and Gabe said we should come here." It was amazing. That was so important for us.

Was there any concern on your part that there might be this perception of, "Oh, there's these three outsiders from New York coming into Portland," or worry about how local Portlanders would take it?
SP: Yeah. We were very concerned about being read that way.
JS: We're still concerned about it. I still think we get slack somethings on the blogosphere, on the internet. It's weird when we read reviews or we read Yelps about people coming in and saying, "Oh, there's these three hip chefs who think they're so cool." [Laughter] And we're like, "We're the least hip people in the world! We just go home every day and come here. We're not into anything cool." People expect us to be...
SP: These snotty New York chefs. It's like, "Where does this come from?"
JS: But I think people who actually come back to the kitchen and say hi, they realize that we're just normal people trying to make a small business work. And that we don't really have any perceptions about food, or what Portland is or what New York is.

Would you rather people not know? It seems like a double-edged sword.
SP: For myself, I'm proud of what I did in New York. And I'm proud of having gone there to challenge myself and learn, so I wouldn't want to hide that. I don't think it's an issue for most people, but once in a while you get someone who comes in, and you can tell they're defensive, almost. And I wish that weren't the case.

So, let's jump to July 4th and the fire. Who was the first person that got the call?
JS: It was me. Kat went to bed already, and a friend of ours who lives on 16th and Alberta, two blocks over, texted to say "Sorry to see about the fire... hope everything's okay with you guys." I had no idea what he was talking about — I was on the couch, in my boxers, watching TV. I threw on some clothes, ran out the door, turned onto Alberta, saw the lights in the distance, and was like, "Oh, shit." I was just stunned. I didn't know what to do. No one had any idea. I went back home, woke up Kat, called Sarah...
SP: I was asleep. And you called me four times in a row. I got up, and was like, "What the hell is wrong with Jasper?"
KW: We [came down that night and] got all the wine out, we swept all the water out. Barista was doing the same thing... you have to do something.

After it happened, the local restaurant community really opened its arms to you. Were you surprised at that?
JS: It was super-surprising. None of us really expected anyone to come forward like they did. Firehouse, when they came, walked in the day after the fire and were like, "We're going to do a benefit for you guys."
KW: We were trying to wash dishes and get stuff packed for storage, and they were like just, "We're doing a benefit." It was crazy. New York people, for the most part, don't do things like that.
JS: It's just amazing to us, because we are so new here, and we don't consider ourselves players in the game here.
SP: And at that point, we hadn't gotten out... all we had been doing was working. So, we didn't even know any of these people.

So what was the second opening like?
JS: I feel like that one was much more rushed than the first one. We had StarChefs the day before, we had to get the floor finished — we had the floor finished the day before we opened.
SP: I remember the day we opened, we had to put a sign on the door to the hallway and the bathroom — "Wet Paint Everywhere". Because there was wet paint everywhere.
KW: They were painting the bathroom — the bathroom stalls!
JS: So I think this one was a little more rushed. We just were waiting for so long, we really wanted to open. We were willing to go in at not at 100%, because we were down for five months.

Has it felt like a year?
JS: No — that big break in the middle...
SP: We're doing two winters back to back. And I don't think that's normal.
JS: We joke that our "year in" will be July 4th. And we'll probably have a party on July 4th.
KW: We joke that we'll get everyone in the building to do patrols that day — everyone will have a few-hour-watch shift.

So if this is your first real summer, anything in particular you're looking forward to, in terms of menu or otherwise?
SP: I'm looking forward to doing a big, relaxed happy hour. I think it'd be fun if we could open up the garage door and the whole back could be really casual and fun.
KW: It was really nice, those summer nights we had at the end of June. We had the doors open, people were sitting outside, you get warm breezes blowing in. And you start getting the great produce. There's just a really nice feeling — it's really busy, but it's really relaxed. It was really fun.
· Aviary [Official site]
· All Previous Aviary Coverage [Eater PDX]
· All Previous One Year Ins [Eater PDX]

For more One Year In posts published today across the Eater Universe, head over to Eater National.