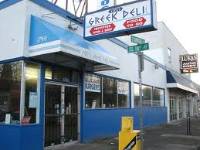 The Oregonian reports that Buckman's Foti's Greek Deli closed over the weekend after 30 years in business, as owners Foti and Jill Kosmas decided to retire. Opening in its place (at E. Burnside, between SE 17th and 18th streets) is Mad Greek Deli, run by the Kosmas' nephew, and according to the O, "The new deli won't look the same as Foti's, but most of the food will be made from the cookbook Christina Kosmas made from her father's recipes." [OregonLive] [Image]