Share All sharing options for: Tommy Habetz on His Upcoming Tex-Mex Spot Trigger

As the weather grows cooler, Eater will be continually checking in on some of fall's most anticipated restaurant openings. Here now, an update about Trigger, opening in the basement of the Wonder Ballroom: 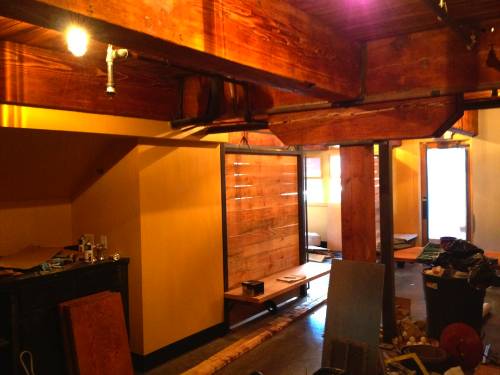 In (roughly) two weeks, Bunk Sandwiches will go Tex-Mex with the opening of Trigger, a 50-seat, full-service restaurant underneath the Wonder Ballroom music venue. Here now, chef/co-owner Tommy Habetz reveals six previously unknown details about the concept — including intel about sand-art decor, the secrets of his queso recipe, and the in-kitchen collaboration with (former Lovely's Fifty Fifty chef) Jimmy Albee.

1) One major difference between Trigger and all iterations of Bunk: table service. "It's going to be a more traditional restaurant," Habetz says. Expect a menu divided into appetizer and entree-sized plates, with the focus on making fresh flour tortillas in-house. "To me, it's about really getting those flavors — grilled meats, really good salsas, fresh flour tortillas, really good beans and rice, and then just some innovativeness around that cuisine," Habetz says. "With our menu, we're going to try and have a balance with the stuff that's gonna be stick-to-your-guts, hearty food, but also some stuff that's using those flavors but lightening it up a little bit."

2) Speaking of that menu, a recent Trigger preview dinner revealed some dish possibilities, including a fried green and fresh tomato salad with arugula; pork belly chili Colorado served with house corn tortillas; and a surf-and-turf of fajita-style hanger steak with pan-roasted prawns. Chicharrones, chorizo empanadas, and ceviche also made appearances on the preview menu.

3) In another departure from Bunk, expect Trigger to have a sweet tooth, courtesy Albee's kitchen influence. "I think one of the things [about] growing as a chef is realizing your strengths and your weaknesses, and certainly my strengths are in big, bold flavors and in hearty kind of food," Habetz says. "Jimmy's really helping me balance stuff out. He's got a little more finesse. And he also has such great background in desserts, too — I'm not a pastry chef — and he's got a real talent for it. Jimmy is doing this apple bread pudding with cajeta and ice cream. And he was on the side of Mount Hood yesterday, picking apples for it."

4) The space itself is getting a makeover, with more room surrounding the bar area and a new private party room taking shape in the front. "But the feel around it is — to me, when I think of rock 'n roll and country/Western, I think of Waylon Jennings, Willie Nelson, Gram Parsons, the Flying Burrito Brothers, sort of like that outlaw-country [feel]," Habetz says. "So I think we're trying to incorporate that into the design. There's a whole wall that's going to be all sand art and terrariums."

5) Though bartender-about-town Kelley Swenson will provide some consulting, Portland newcomer Dan Carr serves as the bar manager — "And Dan is an old indie rock guy that had been in the bar and restaurant business for a long time," Habetz says. Unsurprisingly, expect an extensive tequila and mezcal selection, with a "much more developed [cocktail] program" compared to Bunk Bar.

6) With queso being the menu's most-anticipated item, Habetz hints at his recipe secret: "Velveeta. [Laughs]. It's a little bit of a work-in-progress. The traditional queso, when [I had it] with my wife's family on holidays and stuff, is literally Velveeta and Rotel chilis and tomatoes. We're working around those, incorporating some of that in there, but trying to make it our own. The Bunk style is not super-fancy, so there might be some Velveeta in there."

As previously reported, Trigger is set to debut on October 15.
· All Previous Trigger Coverage [Eater PDX]