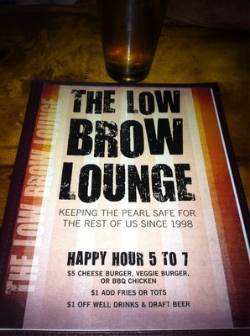 Lindsey Johnson is known in the industry as a cocktail maven. As a founder of Lush Life Productions, she can usually be found helping wine and spirits brands find footing in the digital domain, all while producing booze-fueled, educational events like Camp Runamok, the first-ever bartender summer camp focused entirely on whiskey. These days, however, you'll find her perched up in the Pearl District planning Portland Cocktail Week with her pals at the Oregon Bartenders Guild. She, along with Portland bartender Dave Shenaut, founded PCW in 2010 and they're now gearing up for round three later this October. But when she's not thinking about cocktails, Johnson's drinking them... usually at a fave Pearl District hangout, the Low Brow Lounge.

During the incredibly fun – but hectic! – process of planning Portland Cocktail Week, the team and I don't get too many opportunities to take a break. But, when I do, you can usually find me playing bar dice with the crew at the Low Brow Lounge over on NW Hoyt and 11th — me with a Tanqueray and soda in hand without fail. It's hard not to love the Low Brow. It's dark, really dark, and they're usually rocking some loud punk music. You wouldn't necessarily expect it to be in the Pearl, which is one reason why I love it. They also have a Magic Jäger Wall (seriously, it's a wall made out of Jäger bottles), velvet paintings, and a super-friendly staff. As for the food, somehow, it takes less than three minutes to get a veggie burger. That's just impressive! They also make some mean tater tots that quickly fly out of the fryer, so their hot and crispy when they hit the table. Oh, and I cannot forget the famous Pups and Tots basket! That's tater tots and corn dogs in one deliciously decadent and addictive basket. Best bar snack ever. Low Brow may not be glamorous, but it sure is comfortable and a welcome respite after 18 hours in front of a computer. Plus, Dave Shenaut never beats me at dice. Ever!