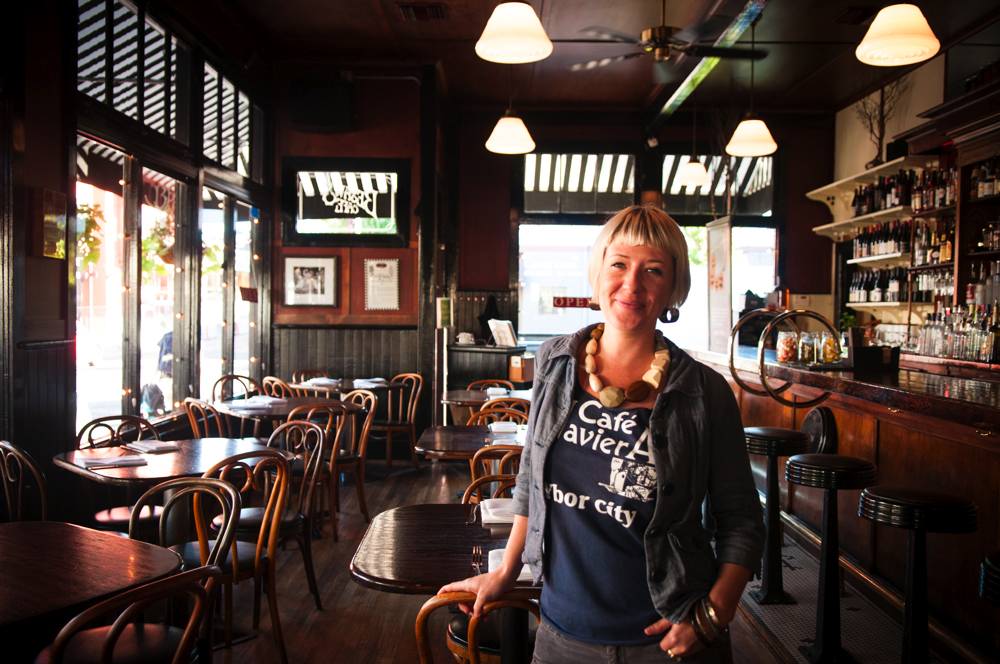 Since purchasing NW brunch institution Besaw's eight years ago, owner Cana Flug has seen business grow by sixfold, turning the spot's once weekend-only lines into daily waits for eggs Benedict and Bloody Marys. "Portland has such a unique breakfast culture — it's voracious in Portland," Flug says. Eater recently chatted with Flug — who admits that prior to owning Besaw's, "I'd never worked at a breakfast house in my life" — about extremely particular orders, 100-people onslaughts, and why Besaw's won't be offering all-day brunch anytime soon.

What's the worst time to try to get a table?
I would say it's pretty standard: around 10a.m.-12p.m., it's going to be a push. There's a lot of ways around that — we do take reservations for parties for six or more. There's always spots at the bar. One of the things we do that helps — we always have hot coffee outside, you can always come in and order a Bloody Mary while you wait. And we'll give out little mini scones while people wait — little buffers that kind of ease the pain. Our first run, if you're an early-morning person, it's not a problem. And once we get past [noon], it's cake. I would say core time is 10a.m. to 12p.m.

So at 10a.m., what's the usual wait time?
At the peak time, it's always under an hour for smaller parties under four. However, if you have that five-top that may not fit at our other tables — we play a lot of Tetris with these tables out here — it may be upwards of 90 minutes. In the summer, it's really entertaining because [Portland has] so many marathons and runs, and walks, so we will frequently get bombardments, onslaughts of 100 people [after an event]. But it's really pretty good, and we work really hard to estimate and keep that time.

Being primarily a breakfast and brunch place, do you deal with a lot of hungover people?
Oh god, yes. It's fascinating that that is a big portion of the crowd. Throughout the day, you change the demographic. At eight o'clock — there's frequently people outside waiting at eight to get in — you get older couples that have been out for a couple hours, and you get lots of families at eight. And as soon as the wait starts, you get people that are more bleary-eyed. The later the day goes on, the higher frequency of people that have rolled out of bed — we get a high quotient of hungover people from noon to three. And frequently, with those guys, a little hair of the dog solves the problem.

What about angry people?
Definitely. There's always going to be people that are either really impatient or didn't have a clear understanding: the people that see somebody go in front of them and didn't understand that they signed up earlier. That's most often why someone gets irritated — they've been sitting there, and they're like, 'I know those guys came after me.' We're frequently doing lots of soothing and smoothing. That's one of the most inherent qualities of someone at the front-of-house — really letting them know more information... I've been at the front on brunch for seven years, and letting them know, 'If you have any questions, let me know, come back, check in, talk to me,' and letting them know there's a really open dialogue for communication — giving them eye contact and letting them know they haven't been forgotten.

You're obviously a lot busier for brunch than for dinner — have you ever considered doing a Tasty N Sons thing and offering the brunch menu all day?
I think maintaining how we do brunch keeps it really special. One of the best things about this restaurant is we do dinner, and it's totally different. There's not the line out the door, but we do great business. And we have a lot of neighborhood people. It's warm, it's intimate, it's super-cozy, and I really like differentiating the two periods. Brunch is super-special, and I want you to come for that during the day. When you come at night, come for the meatloaf, the nighttime comfort food. And I think that's something that's inherently Besaw's.

Besaw's has been around for generations, so you must have your fair share of neighborhood regulars.
We have so many fun regulars. We've got the guy that goes and runs 20 miles in the morning, and then he comes in and orders a 13-egg-white scramble. Seriously? Seriously — and a large non-fat hot chocolate. And he's in every Saturday and Sunday. [...] There's a couple guys who have been coming to Besaw's for 40 years, and they've seen it [all], and then people who came 20 years ago, when it was 24-hours: Besaw's used to be known for curly fries and live music. It's had all these different incarnations, and it's kind of fun that this is where we're at now.

Alternately, being that you're so well-known for brunch, there must be out-of-town celebrities and VIPs coming in.
We've had some great people in. Mostly, in those circumstances, we just try to not even let it stand out, but [for example], Michelle Williams and her daughter Matilda love Besaw's. A couple of my boys have a huge crush on Chloe Sevigny, she frequents in here. It's fun, and all the people that are in the 'hood doing Leverage and all the movies come through.

Tell me about some of the crazy requests you've seen over the years.
Every day there's something new. Just yesterday, I had a customer come in and sit down, and pass me a business card. I look at the business card, and it said, 'Earl grey tea. Very, very hot water. Three lemon wedges — not slices.' It's like they got so tired of explaining how they want it that they actually had a card printed up — they didn't even want to talk about it, they just wanted to make it happen. [...] Some people bring in their own bread — what comes out of people's bags and what they'd like included, from herbs grown organically in their own garden to, one time we had, we don't serve turkey right now, and one time, this lady brought out a bag of turkey and wanted us to make a turkey scramble. We have a build-your-own breakfast omelette Monday through Friday, and we had to take it off the weekend menu because we're so busy — and when you give people the opportunity to write their own story, we have tickets saved in the back with modifications 20 deep. It just got so ridiculous.

From brunch to dinner, what would be your ideal meal here?
In terms of brunch, I love our huevos. After eight years, I'm never tired of them. I also think our Benedicts, on the weekend, are one of the best Benedicts in town. They're just classic — I really love the Tuscan Benedict with the fresh sage and prosciutto. And I always crave our burger; it's just super-classic and comfort food. It's what I crave. And I totally recommend people coming in for our meatloaf and our fried chicken and waffles.

Are you the type who will wait in line for brunch?
If you can put me in front of a bar, I am more than willing to have a cocktail and wait. But if it involves standing, I have a very short attention span. I think to be in this business, you have to have a little bit of ADD with details, and I have a little bit of ADDDD. [Laughs] I'm the person that's there at 8a.m. when they open so that I avoid lines.

And finally, what's your must-have Gatekeeper tool?
It's somewhere between having my favorite pen on me at all times to make any note about any person — we are constantly making little side notes — and the minute you don't have it, everything starts to fall apart. And quite possibly, just having more patience than is humanly possible. Just always having a surefire smile and being ready to soothe and smooth. There's so much reciprocity in what we do, and it's so energy-driven, I feel like at the end of the day, all needs were met and there's a lot of satisfaction. There's a satisfaction in orchestrated chaos, and that's what I do.
· Besaw's [Official site]
· All Previous Gatekeepers Coverage [Eater PDX]