Share All sharing options for: Scott Snyder on His Upcoming Arabesque Spot Levant

As the weather grows cooler, Eater will be continually checking in on some of fall's most anticipated restaurant openings. Here now, an update about Levant, opening in December on E. Burnside: 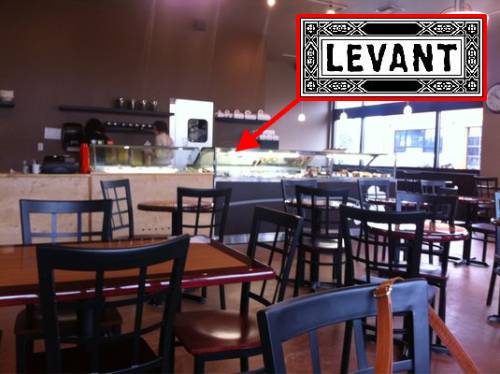 Although he first signed papers for the former Alder Pastry & Dessert space back in March, chef/owner Scott Snyder finally has an opening date in sight for his French-Arabesque restaurant Levant: early December. According to Snyder, Levant's menu draws from the myraid cultures that have immigrated into the Arab region. "I'm calling it Arabesque because it's a good descriptor of the region and the food [histories] in those regions," Synder says now. "My flavor profile is definitely pulled from that — spices, materials, food combinations — but my technique and plating leans more toward French. It's kind of my own take on it. I'm definitely not trying to be authentic to the region, but trying to maintain some of the soul and spirit in it as a jumping-off point." Here now, Snyder reveals five details about the 57-seat spot:

1) A custom-designed grill provides much of the menu inspiration, featuring an open hearth for roasting, multiple Tuscan fireplace-style grills, and an outward-facing log burner that allows Snyder to play with different preps. "Some stuff I've worked with is setting up a quick-style oven in there with firebricks and pizza stones, so you can cook directly on the embers or the hearth stones themselves," Snyder says. "I'll have a bar that runs across the top for hanging things, cooking on string — Cornish hens, whole goat legs, slow-roasting that. And we'll do components of entrees in ceramic casuelas, under proteins, to catch drippings. I've been buying a bunch of cookware I can use in the hearth, pots I can bury back in the embers so they'll slow-cook."

2) As for possible menu items, Snyder name-checks a "play on terrines" involving fresh coriander and sheep and/or goat heads, and grilled sardines coated in a dusting of black lime powder (it's "a Persian black lime that gives it kind of a tart perfumed flavor," Synder says). On the more vegetarian-friendly side, Snyder offers a composed carrot dish ("some harissa-glazed, some grilled, some ember-roasted, a little bit of carrot puree, carrot greens, coriander") served on a house bed of labneh, as well as a play on sauteed greens with pine nuts and currants. "But kind of switching it up," Snyder says. "I've done it with pistachio, berberis, and a little bit of chermoula."

3) The menu itself be broken into small- and large-plate sections, with additional options of seasonally inspired sides. Snyder plans to slowly roll-out brunch and late-night happy hour menus post-opening, and a prix fixe tasting menu also in the works: "I'm still working on the format, to some extent," he says. "I think people are willing to do it, and I think it's a good way to showcase what you're doing and give people a broad sampling. I want to keep it affordable, so I'm thinking if it's a four-course: $45 or $50."

4) Unsurprisingly, Snyder's taste for Middle Eastern spices makes it difficult to source everything locally. But "I'm talking to a couple different farms about growing these specific things I'm looking for," he says, "like za'atar herb, and a kind of juice mallow that's used in Egyptian cuisine."

5) Bartender Lydia Reissmueller (formerly of Central and currently a cocktail consultant/caterer at her TenderBar company) is behind the cocktail menu, which Snyder calls "fairly refined." Flavors and ingredients from the region will play off of classic cocktails: "She's working with spices, fruit and vegetable juices, bitters, infusions," Snyder says, with a focus on matching the anise flavor profile of raki. "We're trying to get a hold of more raki, which is essentially a pastis that's drank all over the Mediterranean. It's hard to get a lot of it, of quality, in Oregon. But the spices, with cocktails, work really well with ryes and whiskies, and all the cocktails will be very different from one another."
· Levant [Official site]
· All the Previous Levant Coverage [Eater PDX]