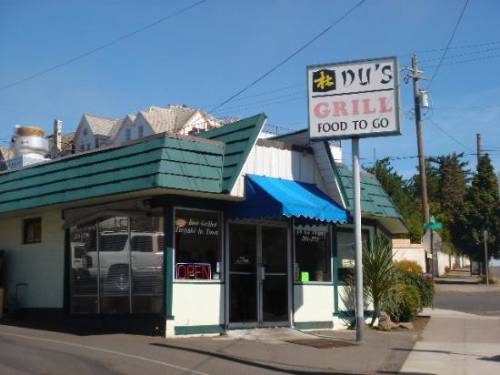 When Aviary reopened after suffering fire damage last year, it expanded to build a full bar with bar manager Ross Hunsinger behind the stick. Hunsinger, formerly of clarklewis, Siam Society, and McMenamin's Kennedy School, created an entire drink menu specifically for Aviary's cuisine, working closely with Aviary's trio of chefs to keep the cocktail list seasonal and unique. And like other fans before him, you can often find Hunsinger following the smells of Northeast's teriyaki spot Du's Grill.

After much waffling about my favorite place, I realized that it really had to be Du's Grill on Sandy. For starters, you can smell the heady blend of charred meat and smoke from a mile away depending on the direction the wind is blowing. Secondly, its consistency is like no other restaurant I have come across outside of fast food. I always order a Chicken and Pork Plate which comes with perfectly cooked sticky rice and an ornamental smattering of iceberg covered in poppy seed dressing. I took a take-out order into work once, and a corporate distributor identified Du's by the aroma and a quick visual on the side salad. One can really do no better in either the dead heat of summer or the deepest cold of winter than to roll into Du's and grab a mixed plate of pork and chicken teriyaki and think about the opposite season and how you'd much rather be eating this food then — for some reason it makes sense... You gotta ask for a bottle of both the teriyaki sauce and their poppy seed dressing to allow yourself the opportunity to really bathe the plate and yourself in the glory of these simple sauces and plates.

Try to get there after the lunch rush if you're planning to dine-in, because the dining room only seats a dozen or so people. I highly recommend [dining in] because you get to see the insane cross-section of people that come here for bento church — little old ladies, the mailman, iron workers, college kids, cops — they all eat here. You will also get to listen in on all the back and forth from the one lone Asian guy at the counter hollering orders in Spanish to the back, which creates this cool sense of multiculturalism.