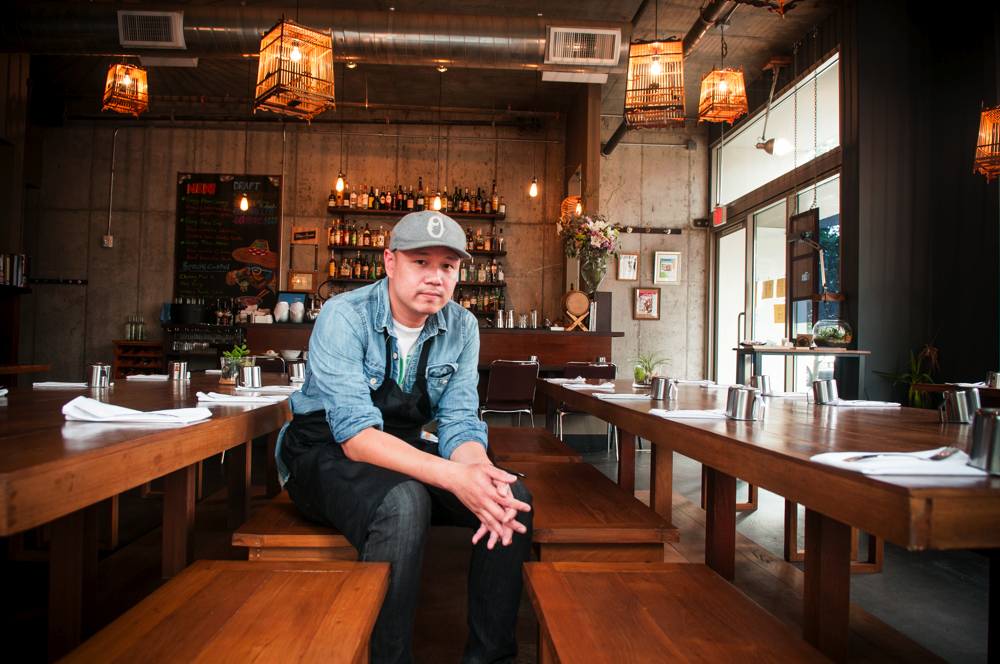 Born and raised in Bangkok, Akkapong "Earl" Ninsom had his first taste of authentic American cooking as a high school sophomore, during a three-month student exchange in Grand Rapids, Michigan. Chowing down on pizza, burgers, and pie, never did he imagine that he'd one day open a restaurant, serving Americans his version of authentic comfort food. But the day he completed college in Thailand (where one of his roommates was none other than Nong Poonsukwattana of Nong's Khao Man Gai fame), Earl's parents handed him an unexpected gift — a plane ticket to Los Angeles, where he worked long, exhausting hours at a family member's restaurant, washing dishes, taking out the garbage, and mopping the floors.

After moving to Portland with friends, Ninsom took a string of cooking jobs at various family-owned Thai restaurants, then went home to Thailand to get his Masters degree before returning to Portland at his girlfriend's urging. Eventually, his entire family immigrated to Portland and together, opened Thai Cottage in downtown St. Johns. In 2009, seeking to break out on his own, Earl opened popular Mee-Sen Thai Eatery on N. Mississippi Avenue, then left Mee-Sen and opened PaaDee on November 12 of last year. As PaaDee's one-year anniversary approaches, Earl met with Eater to explain the faith needed when opening a place in the middle of Restaurant Row, the story behind the bird cages, and how sometimes, you end up at FedEx copying new menus an hour before your restaurant opening.

You opened PaaDee in the middle of Portland's famous Restaurant Row, were you worried about the competition?
At first it was really hard, because the top restaurants in Portland are surrounding us, you have Bamboo Sushi, Tabla, Screen Door, Pambiche, Navarre. After we'd signed the lease but before we started building, I got cold feet. I was like, 'Aaagh, are we going to survive?' But you trust in what you do and make sure you do it right, work hard and someday people are going to notice. We're not here to compete with anybody, we're just here to offer food that we want to offer — honest food.

How did the buildout go?
It was super slow because we had to negotiate with the landlord for almost a year to get the deal that we could afford. There was no tenant improvement, nothing, we had to invest out of our own pocket, so that was very challenging. I was in a car accident right before I took off from Mee-Sen, I got a concussion and it was hard to do things, so I took three months off to heal — but then we got a lease signed so I had to come and figure out things. The hardest part is figuring out where to put things. The sink, the refrigerator, you have to figure the exact space before you build out. And you have to remember that you need storage to put things in. We don't have storage at Mee-Sen because that was my first time building something, and I didn't know. We had to rent a space in the back from the neighbor. So I knew I needed storage here. But still we don't have enough. We have only one fridge, so I have to get produce every day, but that's a good thing because we get stuff fresh, and more often.

Who did the décor? Whose idea was it to hang the birdcages?
The concept and idea of the restaurant was childhood memories, so when I went back to Thailand last year to heal from the car accident, I tried to figure out what I grew up seeing. I walked through my neighborhood, where I would always see an old guy taking care of his bird, he had a small house but he had like 10 different birdcages in there, and he was enjoying his singing birds every day. So that's the idea for the birdcages, it's something we grew up seeing. I also walked past a shop that makes furniture, and this shop is awesome because they use reclaimed teak wood, they clean it up and make furniture. The tables, birdcages, clay pots, cups, they are all from Thailand. We filled a 40-foot container and sent it here. It all reminds you of what you grew up with, and it's better in terms of business. It costs less, and you feel good.

What shaped the menu?
When I went to Thailand to heal, I took cooking classes. Even though my body didn't feel well, I tried to learn and study as much as I could, and to find the dishes that reminded me of the food that I grew up eating. I stayed with my best friend and I took the class for a month, five days a week, and we cooked five dishes every day, and I would bring the dishes back home, and they would test the food. And I was like, 'If Thai people say the food is good, it's good.' So I learned a lot and then selected some dishes that could be offered here. There were some sauces I learned from a Chiang Mai native.

And now every week I go to the farmers market and see what's in season. I go the Saturday PSU Market, and Sunday at Montavilla because I live close to there. I get to know the farms, like Gathering Together — they are actually the only farm that has cilantro root, one of the key ingredients. When I went back to Thailand and made everything from scratch, every curry paste requires cilantro root to make it herbal, grassy, to make it traditional. But it's so difficult to find, sometimes we have to use stems just to make it taste close as possible. Then I went to the farmers market and asked around, and they point me out to the people that have the stuff we are looking for, which is awesome.

How was PaaDee's reception, were people welcoming?
Yes, really welcoming. But when the food was good, they said it was good, and when it was not good, they said it was not good. They were very honest, and I like that. Our first month and December were really great, then we dipped in January. People started coming back in March when we got the new crew. They noticed something had changed and started coming back again. We were lucky enough to get a new chef, Amporn Khayanha, an awesome chef who's been cooking Thai food for 17 years — she was the head chef at Typhoon on Broadway, then they closed, and she walked in here one day and asked for a job. I didn't expect this kind of person that's super humble and super knowledgeable to just come ask for a job. She's got everything, she can do everything, and she cares. Sometimes at 11 at night she'll call me and say, 'I think this should work this way or that way.' I've never seen any person who cares so much and is so focused like her. We're so lucky.

Have else things evolved since you first opened — the concept, the menu, the staff?
The staff. The good ones have survived. Our front manager has been with us from the first day. One cook has been with us from the first day. Only people who care about what they do survived. We have three or four staff from the first day who are still working. We try to find people who have a positive attitude and really care about what they do. One of the girls who works here texted me yesterday on her day off and said, 'We should have this button on the POS system, it's going to make things easier,' and I was like, 'Oh thank you, I thought it was your day off?' They care. The menu has changed a little bit. The good things stay. We take off dishes that don't really mesh with people, like some spicy dishes that people don't really like will get kicked out.

Does it feel like it's been a year?
No, it's been fast! A couple weeks ago one of the cooks that survived from the first day said, 'What are you going to do for the one year anniversary?' And I was like, 'Oh, it's almost a year!' I didn't know. For sure, we'll have a benefit dinner. On [November] 12th, it will be the first year since we opened. It was a Saturday, we opened at 5:30p.m., we were trying to open at 4:30, but we were still making changes — I couldn't do some dishes and I was like, 'Okay, I have to change the menu,' so I ran out to print them at FedEx, and as I ran out, I said 'Change the opening time to 5:30 please!' When I got back it was almost 5:30, so I ran to the kitchen to tell them what to do — they had just started working Thursday so they had no idea what to do! Then we closed for a week to figure things out.

You have a brand new project on the horizon, Tarad, what's that going to be like?
Tarad means market, it's a mix of a small restaurant where you can get small buns and a few noodle dishes, but I also wanted to offer some hard to find ingredients that we actually use to cook. Then I can just go there and get stuff, and people who want to cook Thai food can get the right stuff, like curry paste and fish sauce, and not just wander around an Asian market. Like sometimes you want coconut milk but there's also coconut cream, and different brands, how are you going to choose? And we will have information to show them this is the stuff you can cook at home easily, and we will have some instructions of how to cook, for example, curries. And also some cookbooks, I'm trying to figure out which ones aren't too expensive. I need to do good sourcing, because you can have the really good stuff, but if people can't afford it, that's not good!
· PaaDee [Official site]
· All Previous PaaDee Coverage [Eater PDX]