As the weather grows cooler, Eater will be continually checking in on some of fall's most anticipated restaurant openings. Here now, an update about Southland Whiskey Kitchen, opening soon on NW 23rd: 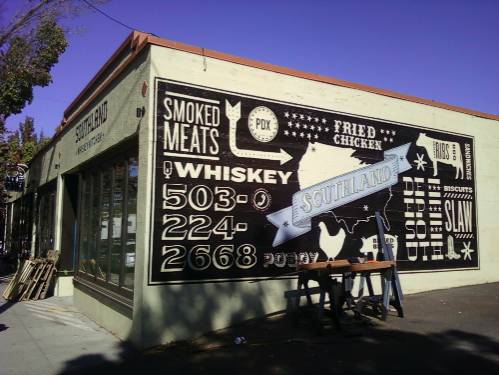 Seattle-based restaurateurs Nathan Opper and Zak Melang currently operate seven outposts of their Casa del Matador brand (including two in Portland), and earlier this year, they branched out with their first Southern concept — Kickin' Boot Whiskey Kitchen, which debuted in Seattle this August. The duo's second whiskey-based restaurant, Southland Whiskey Kitchen, is slated to open October 11 in the NW 23rd building that also houses Casa del Matador. Now, Melang and Opper present a few previously unrevealed details about the restaurant:

1) The restaurant's 2,600-pound, wood-fired smoker was custom-built in Mesquite, Texas. According to Melang and Opper, the steel smoker can cook 600 pounds of meat at once — including whole racks of ribs that fit on shelves 32" by 39" inches wide.

2) Opper will offer six different styles of barbecue sauce — inspired by a summer-long research and development trip in the South — including a a traditional tomato-based sauce; a sweet version with orange and tamarind; a spicy habanero; a version of a Alabamna white sauce (which traditionally uses mayonnaise instead of a tomato base); a North Carolina-inspired yellow mustard; and a hot habanero.

3) Like with the neighboring Casa del Matador, Southland's dining room furniture and fixtures are heavy on steel and reclaimed barn wood. Five custom-built steel chandeliers — which each took 10 hours to construct — were hand-wired by E. Burnside's Hippo Hardware, who supplied vintage Edison bulbs for each of the 185 sockets. The 3,700-square-food space seats 80 in the dining room, with room for an additional 40 in the bar.

4) Eugene-based muralist Dan Hitchcock painted the mural on Southland's exterior (pictured above), which was designed by Brett Schwager of Portland and Seattle's Turnstyle Studio.

5) And yes, like the Matador, Southland will offer happy hour seven days a week.
· All Previous Southland Coverage [Eater PDX]