Share All sharing options for: Sommelier Speer Finds Room at the Morrison Hotel 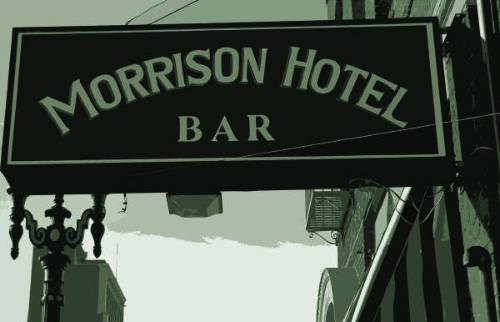 Sommelier David Speer grew up in St. Louis and moved across the country ultimately ending up in Portland 10 years ago. Prior to opening Ambonnay, the all-Champagne bar inside the Olympic Mills Commerce Center, he was (and still is) running Red Slate Wine Company, where he teaches wine classes and helps clients find wines for their cellars and everyday drinking. But when Speer isn't pouring Champagne, you might find him at the bar... at the nearby Morrison Hotel.

After I close Ambonnay, and am not too beat, I like to head over to Morrison Hotel Bar. It's an oasis of calm in an area filled with noisy, crowded bars. I discovered MoHo because of one of my employees suggested it after a long shift, when we both needed a beer to unwind from selling Champagne all night. I enjoy going there because the bartender/owner, Chris Joseph, is an old school bartender, low key yet delivers great service. There is no emphasis on craft cocktails, rather just your standard back bar offerings along with a case packed full of great beer. There's no pretension about the beer either, just lots of choices without any beer snobbery. When I care for conversation, Chris and the patrons provide, but more often I just want to sip my beer and enjoy the juke box. In a city full of fantastic, specialized bars and restaurants, Morrison Hotel Bar is great at just being a bar. Sometimes that's all I want at the end of a long day.