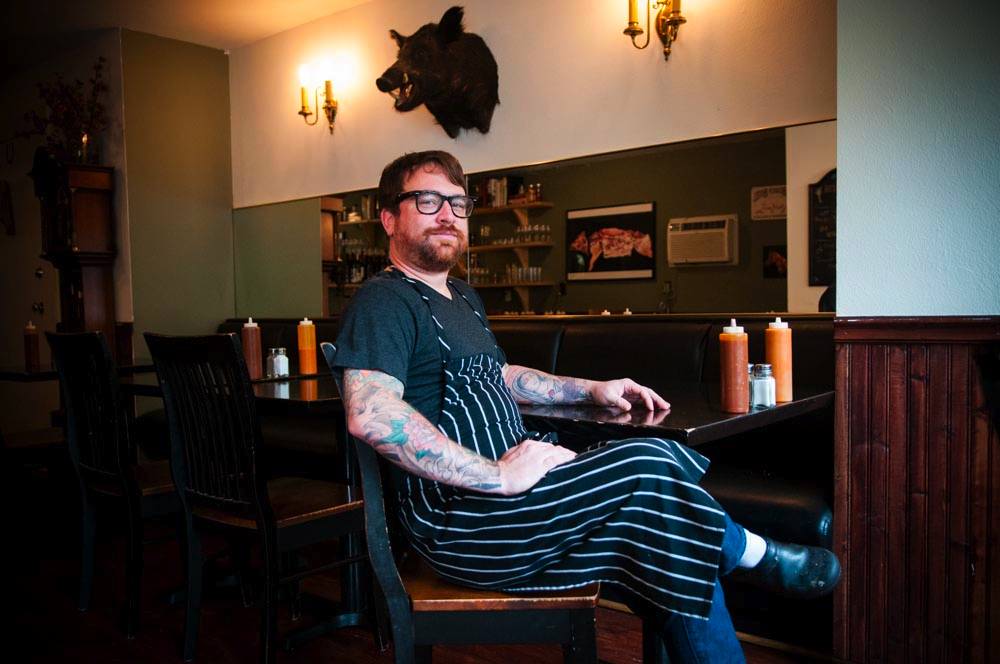 After 20 years in kitchens around town (like Olea, Papa Hayden, and the Original), chef BJ Smith starting smoking up last year with the opening of his barbecue joint Smokehouse 21, which took over the diminutive space once home to the delightfully hole-in-the-wall Tanuki. "The original concept that came about was me just really wanting to get back to basics of cooking really good, simple food, and focusing on one style of food," Smith says. Last weekend, Smith celebrated the 500-square-foot spot's first anniversary with a cowboy-themed party, first chatting with Eater about eating barbecue dry, smoking out the neighbors, and how best to play a game of "meat Tetris" (hint: inexperienced players might end up spending the night in the restaurant, smoking brisket through sunrise).

How did you land on the Tanuki spot?
When we first opened, there was no barbecue in the area to speak of, really, and I thought it would be a really good addition to the neighborhood over there. I was a regular at Tanuki for years and years, basically the whole time [Tanuki chef/owner] Janis [Martin] was there. And I'd always loved that space. I was looking all over town, probably for four to six months. But the second that became available, it seemed like it was going to be doable, I pretty much jumped on it.

The Tanuki space was famous for being bare-bones and not having a full kitchen, so what was the build-out like?
I can't really speak to what was there; I never really looked in the kitchen before I had occupancy in the space. But basically what I took over was an empty shell, so a lot of stuff had to be done. We redid the floors, the walls, the only thing we didn't do was the ceilings. And there was a lot of home cabinetry in the dining room that we ended up tearing out — we literally gutted it, and built it back together. In the kitchen, we did everything in the kitchen that doesn't have a hood. There's a commercial convention oven, two warmers, hot plates, all that good stuff — and if you didn't really look close enough, it looks like a real kitchen. I set up an actual formal line, and it's pretty streamlined for the amount of space that we have.

So no major surprises during build-out?
We actually opened a month early. I planned on using 10 weeks to do the build-out, and we did it in six. It was only my dad and myself; we did everything ourselves, and I was kind of lucky in a sense that I wasn't working — I know a lot of people, when they're working on their place, they're still at their previous job — but I was able to focus 100 percent of my time. And my dad's retired, so we were basically there seven days [a week] until it was done. And when it was done, we pretty much opened the doors — we did two test dinners — and we just opened.

Let's talk about the smoker. It's sort of squeezed into a little alley space outside the restaurant — was that always the plan?
Yeah. When we first opened, we didn't have that little fenced area out there to keep the wood and the smoker — basically, I put that stuff up just for aesthetics — but now that the fence is there, it almost looks like it's always been there, and I still have customers all the time that ask me where the smoker is. Which is funny, because they've literally passed it walking in. I think that it doesn't hurt, because you can smell it two blocks away — it works for us, as far as the way the space goes, but also advertising for us as well, because we get a lot of customers walking in just because they can smell the smoker out there.

Have you gotten complaints from the neighbors about the smell?
The people right upstairs, the people that live in our building are really cool. They frequent the place quite a bit. We had a couple people, like the salon next door, they weren't too happy about it when we first started up. But we've worked it out with some fans over there, and just really paying attention to the times that we're going in and out [of the smoker] — because when you open it up, that's when you have the majority of the smoke rolling out of it. So, we're being as respectful as possible and keeping it closed as much as possible, and I think that we're not pissing too many people off at this point.

Thinking back to a year ago, how has the menu changed since opening day?
The funny thing is, we've almost stuck to the same basics since we opened. Going into it, I felt like barbecue was going to be a pretty simple thing to go into, and it isn't. It's like anything — we're really passionate about it, but I just never feel it's good enough. So, it's a constant, I'm constantly doing things to make the barbecue better, or constantly learning different woods to work with, working with different meat producers. But the same basic menu has always been there. We change things seasonally as far as sides go, but the main menu's been the same, and the way we're preparing it has had a few tweaks along the way. And it's the best it's ever been — I think it's pretty down to where I want it now.

What about the sauces?
The sauces — that was another thing. I was happy with all the sauces in the beginning, but now I'm really happy with them. We're starting to look into doing some bottling, because we've gotten a really good response. And I'm working with Tom and Evan over at New Deal Distillery, and our hot barbecue sauce now is a "Hot Monkey" barbecue sauce, it's kind of a fun collaboration that we're going to stick with. We're looking forward to, in the very near future, having that one bottled, and you can get it at the restaurant and at the distillery. Hot Monkey's just really good, and really easy to blend it into a barbecue sauce. It came out fantastic.

Was bottling the sauce always part of the master plan?
No, no — the only reason I even started thinking about it was we got such a good response on it. It's a demand thing more than anything, which is really awesome. Because the sauces, they were never really the big focus — because barbecue, when I eat it, I don't even use sauce. I eat it dry.

You're kidding. So, looking back to a year ago, how did opening night go?
Seriously, a year ago feels like a week ago — and up until about four months ago, our first day was the busiest day we've ever had. It was packed all day, all night, to the point where I was concerned about being able to keep up with the smoker. But no major disasters? Well, we've learned to do meat Tetris with the smoker now. The one thing I do remember is me spending the night there, sitting on the banquette in the restaurant, because we weren't going to have enough smoked meat for the next day because we ran through everything. Now, we have that figured out. But the first three days we opened, I think I slept about four hours. I was just hanging out at the restaurant, keeping the smoker rolling. I don't have to spend the night anymore; we have that whole thing down.

The space recently got a little facelift for its first year. Why make changes to the dining room?
I think the space — I had it painted that darker shade of green, and with the intimate size of the space, I think it looked a little too formal in there. And I really want it to be a casual place to come and get dinner. So, we brightened the place up, painted some of the walls white, put some brighter artwork in there, and I think it's done a lot. Walking in the next day after we had done all the work, it felt like a different dining room. I think it's had an effect on business as well, because during the daytime, I think it was a little too dark for people, and it was hard for people to even see in. More often than not, I'd see people literally putting their hands next to their faces to look inside. Since then, we've brightened it up so much that, the following morning, I could see inside from Ken's [Artisan Bakery] across the street. That was the goal we were trying to accomplish — increase visibility, and make it seem less formal in there, and more casual.

Aside from the dining room color, there anything else you'd like to go back in time to a year ago and change?
It's kind of the ongoing joke at the restaurant, no joke, at least once a week I'll say, 'Why didn't we do this a year ago?' A lot of it's just technique with the food, and we just started doing DeliveredDish, which I've gotten a huge response from. I really wish I would've done that a long time ago — something I really wanted to do a year ago, and we kind of tried, was delivery — and it was just too hard for us to have a dedicated employee there to deliver food. But the DeliveredDish thing is working great, and that's one thing I definitely would've done a year ago. Mostly everything else, it's all food: How we're doing the brisket, the ribs, we've tweaked since a year ago.

And you mentioned a second ago that it feels like you opened a week ago. Is that a good thing, or more of a scary 'where did the time go' thing?
I think it's a really good thing. I've learned a ton over the last year. I'd been running other people's kitchens and restaurants for many, many years. And it's an extraordinarily different thing when it's yours — the amount of care and passion that goes into the place, the amount of stress that goes into it — it's been an unbelievably good year, but I'm definitely looking forward to our second year. Just because we have things figured out a little bit better.

Anything new in particular to look forward to in year two?
There's a couple things. We're going to be bringing in whole animals — whole pigs and whole lambs — and we're going to be doing monthly dinners. Like a whole lamb dinner, family-style, and the same thing with the whole pigs... I'm trying to work something out with one of our wine producers about possibly doing a demo when we're breaking down the whole animals, doing something fun with the butchery and having a wine lunch after that. It's something I've always wanted to do, and now that we have the day-to-day operations with the food nailed down, now I feel like we can play a little bit more.
· Smokehouse 21 [Official site]
· All Previous Smokehouse 21 Coverage [Eater PDX]