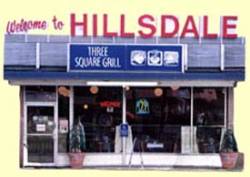 While pursuing a master's degree in Public Administration, Jami Curl made a promise to herself: open her dream bakery by her 30th birthday. And, in November 2005, just a few months after turning 30, Jami opened the doors to Saint Cupcake. So where does a Chief Baking Officer go to get a bite when she's not baking cupcakes? You can often find Curl curled up in the SW 'hood of Hillsdale.

One of my favorite places in town is the Three Square Grill in Hillsdale. I've been going there since my single girl days — and at one point in my life was indulging up to three times a week! The Farmers Market Vegetable Platter is one of my favorite things on the menu — it's a plate of local Portland deliciousness made even more special with the addition of Southern grits and greens. When I was pregnant, I went to Three Square as often as possible to satisfy my craving for spicy garlic fries (but I'd also order a bowl of soup, so it was totally healthy... right?). Hillsdale is an awesome little community and not nearly enough people venture out of their own "cubicle" of Portland to experience it — and they should!