Share All sharing options for: Good Taste a Winner for Tails & Trotters' Cockcroft 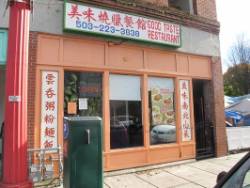 Mark Cockcroft is co-owner of Tails & Trotters, a Pacific Northwest purveyor of hazelnut-raised pork. When Mark was nine years old, he moved with his father to Asia, where they spent six years living in Thailand and Japan. During that time, Mark's father helped instill a sense of culinary curiosity in Mark by requiring him to try new things at least once, a mantra he still holds today — except at one of his favorite Chinatown haunts, Chen's Good Taste. He always orders the same thing. Always.

I love Good Taste for the wonton noodle soup with either the roast pork or the roast duck for a change of pace. In fact, it's the only thing I've ever had there. Many bowls of this fine creation have been consumed over the last six months as we planned the opening of Tails & Trotters first brick-and-mortar butcher shop. The wontons are the star of the show — plump packages of pork and shrimp seasoned with a nice hit of sesame oil. The servings are "healthy" and the decor is minimal, but the tables are usually full during the lunch hour — a sign that they are doing something right.