Share All sharing options for: Castagna's Woodward Likes it Late at Night Light 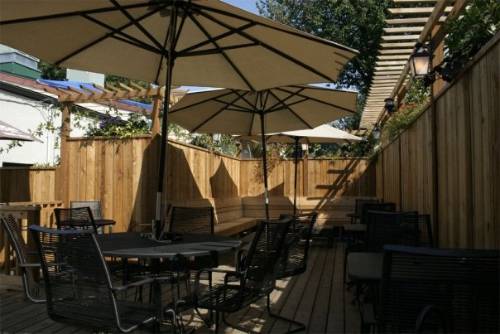 Justin Woodward, the executive chef at Castagna and Café Castagna, enjoys the challenge of evolving cuisine, using locally grown produce with ancient and modern techniques. Woodward describes his cuisine as seasonal and progressive and he focuses on surprising his guests with common and uncommon ingredients. But, when he's off the clock, he often keeps his own personal choices simple — really simple — at his favorite late night haunt, the Night Light Lounge.

Night Light Lounge is a great place to get some sustenance after a long day of cooking. I go there at least every other week. Actually, sometimes my girlfriend and I go there a lot more. Their burger is really great and the salads are always dressed just right: not too much, not too little. They change the art on the walls often too, and we appreciate that considering just how much time we spend there. The music depends on who is tending the bar, but one of the bartenders is a metal head and, well, I'm a metal head. On Sundays, when he's on, the music leans towards the heavier stuff — Black Sabbath, that sort of thing — and that's just fine with me.

At the Night Light you can get good food really late that is not swimming in grease, and where else can you get a simple mezze plate that late at night? The daily specials are good, as is a grilled cheese and tomato soup if, it is rainy. (But really, the chef's hairstyle is the reason why I go.) To drink I usually get something simple a beer and a shot or a Manhattan. Sometimes you have to keep it simple.