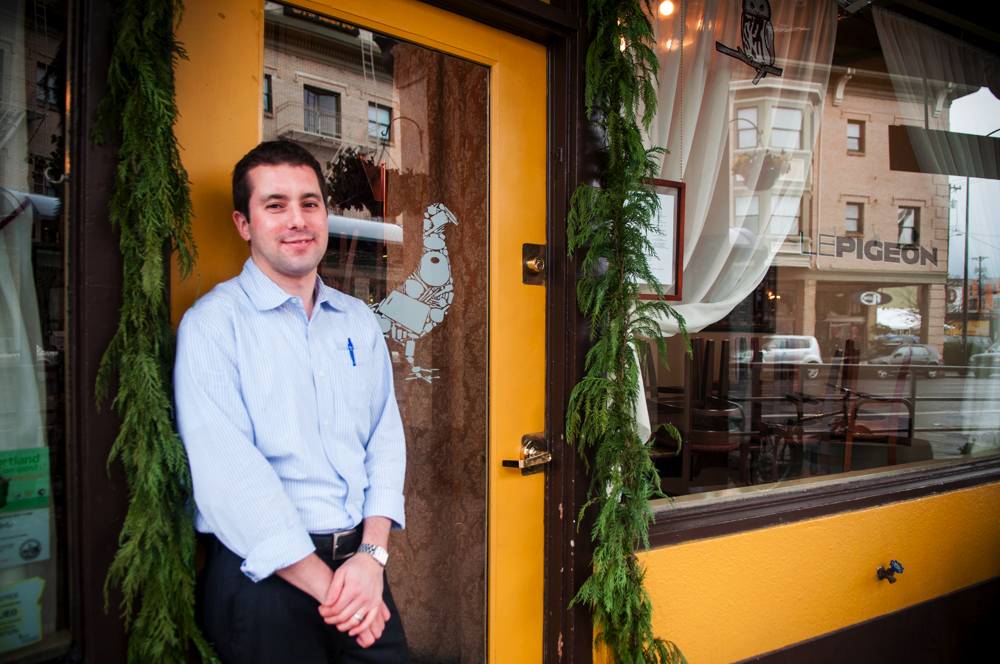 Since debuting in 2006, chef Gabriel Rucker's French bistro Le Pigeon has (rightfully) enjoyed monumental success, culminating in a James Beard Award for Rising Star Chef in 2011. General manager Andy Fortgang, who's been with Le Pigeon since the beginning, has six years of experience managing Le Pigeon's famous communal tables, its wine list, and many an in-restaurant marriage proposal. Here, Eater chats with Fortgang about chef's counter love connections, out-of-town regulars, and foie gras-obsessed tourists (note: a marijuana cigarette is not acceptable payment for your lobes of foie).

Which isn't too bad: So what's the worst time to come in without a reservation?
The worst time, I think, is walking in on a Friday or Saturday night, right at 6:15p.m. And usually that's just because at that point, the chef's counter, which is the 10 seats we have for walk-ins, usually fills up over the course of the first 30, 40 minutes. Once we get past 6:30, seven o'clock, there starts to be an ebb and flow. The wait's really long when you have 10 people sitting at the counter and everyone's just putting a fork into their appetizers.

Le Pigeon is six years old now, so I'm sure you have some favorite regulars.
We have a good amount of regulars, especially after all these years. We have two different couples that are [here] pretty much every single week — one couple comes every single Friday at five o'clock, sit, and have a tasting menu. ... Especially now that we've been here six years, there are familiar faces we see from people who don't even live here. People that travel for business — there's a guy who came in Monday night who just got in from the airport. He comes to Portland four times a year, so he ends up having dinner here by himself, four times a year. By and large, what's really fun about our regulars is that they come because they love what we do. There's little, 'Oh, those people are here — we need to do this different or that different[ly for them].' It might just be like, 'That guy likes the end of the bread.'

You actually remember stuff like that?
There's one person who sticks out in my mind. My mind's always focused on wine; considering what I do, I'm fairly bad with names, but I can remember what bottle of wine people drank, which people find more impressive. [Laughs] And our menu is constantly in flux... that's really the great thing about our regulars, they're coming in and they know they're not going to have anything they had the last time. It's not like coming in and having that same dish that you love. There's nothing wrong with that — but Le Pigeon has really grown and changed since we first opened, and I think our regulars have grown and changed with us.

That was actually my next question. In these six years, especially with Gabe [Rucker] racking up accolades, Beard Awards, how have the crowds changed?
I don't know if the crowds have changed; back in 2007, when Le Pigeon first started to get a lot of notoriety, that was probably the craziest, busiest time, just in terms of volume and chaos. And right after he won the James Beard Award in 2011, it was really, really busy. I think the biggest thing we've seen, as we've gotten some press outside of Portland, is that we're kind of on the tourist map a little bit. It's fun, it means we get a lot of people who are really into food, or in the wine business, or in the restaurant business in other cities. It's always really cool to talk to those people, get their impressions, hear what they're doing. That's really the only way the clientele has changed.

Has that attention lead to a change in expectations from the diners?
When the restaurant first opened, it was just trying to stay open. And as we've gotten better working with the space, the service, Gabriel's cooking has evolved, I think we have certain things on the menu that we never would have had four or five years ago — just because we wouldn't have made them four or five years ago. Now, we offer a tasting menu, and probably a third of the people — some nights, it's half the people — have the tasting menu. So, it's not just people stopping in to eat and have a quick dinner like it was six years ago; on some nights, everyone is really here to dine. And it's really about the experience, about food. And that's something that's changed. ... [But] for us, we never want Le Pigeon to feel fussy and fancy. So, we've grown, but still [have] one foot in the new, one foot in the old. If we've done well enough to get press or a reputation, and some people have high expectations of us, then let's live up to that. That's the thing about a good reputation: It's hard to earn, but it's harder to keep. So that's a challenge for us.

Speaking of reputation, how often do you get someone just wandering off the street who doesn't know about, say, the communal tables or the chef's counter or the accolades?
We do have people wander in off the street. More often than not, sometimes people come in and they've never been here, so they don't know it's communal tables. Sometimes it's people's anniversary and they're surprised — it's not what they were planning on — and we do our best to make them comfortable and let them know it's a communal table, but your meal is your own, and we'll do our best to make you really comfortable. And sometimes, people make a reservation [requesting a non-communal table], and I'm like, 'That's all we have.' I always say, 'People generally have a great time, people celebrate birthdays and anniversaries with us and enjoy it, but if it's just not for you, that's okay.' ... Some people are just not okay with that, and we get that. I think one thing about the restaurant business is, you want to please everyone who comes through the door. But you can't be all things to all people.

So you must have some great communal table stories.
It's always the people that, at first, don't want to sit at the communal table, that then make friends with the people next to them — and we get in trouble because we can't turn the table fast enough, because they're talking to their new best friends. That certainly happens. There are times when — let's just say, when single diners come in, they generally are sitting at the chef's counter, and some nights we'll have a whole row of them. I feel like a lot of times, a couple people end up leaving together — even just to get a drink, but I don't know.

Let's talk crazy requests. What are some of the ones you've gotten from guests?
[Long pause. To Rucker]: Any crazy requests you can remember?
Gabriel Rucker: We get people asking to buy foie gras. It's not 'crazy,' but they ask for that a lot.
Fortgang: There was that lady who, a couple times, asked you to cook a whole lobe of foie gras for her.
Rucker: Yeah, she ate a whole lobe — two pounds of foie gras — by herself. [Another crazy thing that happens are the people who], right in the middle of a Saturday night, try to get me to go outside and get stoned with them. How often does that happen to you? Less now that I have a wedding ring and act like a dad, but people used to — I don't even smoke pot — but they used to ask [all the time].
Fortgang: The other day we had a lady who wanted to buy some whole lobes of foie gras. We said, It's $250, and she started pulling twenties out — I thought she'd have a credit card, so I didn't have any change — so I said, let's make it $240. She said, Okay, and then she just threw a joint down and said, 'Here you go.'

Stoned or no, what are your favorite things to eat here?
If I could construct a menu of things that we've had here, the first thing I'd have is chicken oysters — it was a chicken-fried oyster, with chicken oysters cooked gently sous vide — in a radish vichyssoise. After that, I'd have our slow-roasted lamb neck with chanterelles.

And finally, what's your must-have gatekeeper tool?
Honestly, appreciation is what comes to mind. I'm just appreciative that people come. So, if we have a wait, I'll tell them that we don't have what they want; I'm just being appreciative for them that they want to come to our place. And hopefully, they can sense my appreciation.