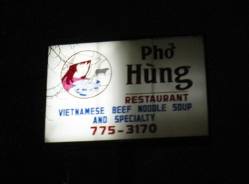 The Country Cat co-owner and pastry chef, Jackie Sappington, could not live without her mixer and offset icing spatula — but while she loves to create whimsical takes on classic desserts, in her limited spare time, Jackie can be found seriously training for and running marathons. Or, when it comes to dinner, she's dining on "noodles and broth" at Pho Hung, a frequent stop for Jackie, her hubby, Country Cat co-owner and executive chef Adam Sappington, and their kids, Atticus and Quinn.

Pho Hung has been our go-to Vietnamese soup restaurant for ages! At least 15 years. We've been going there for so long, the staff has seen our boys grow up eating pho. After reading the back of their menu and learning that pho is a healing broth in Vietnam, my family and I often go there when we are under the weather and have soup. Our kids, ages 10 and 7, could eat pho everyday. They call it "noodles and broth." They know it as the go-to when they aren't feeling well. And love it before a soccer game! We used to give them little "share" bowls, now they eat a bowl no problem. My boys always get the #9 which has brisket in it. They are slurpy little dudes and suck it down to the last drop. My dear Adam usually gets the #13 with has tendon and other "meaty" stuff in it. I love their broth! It's got great flavor and is very satisfying. I'm not eating as much red meat these days so I get the #0 which is just noodles, broth, onion, cilantro. It's one of my favorite things to eat after a long run on a fall or winter day. It's simple and yet filling, but not a gut bomb.