Share All sharing options for: The Expert Panel on 2012's Best New Restaurants

As is the tradition at Eater, our closeout of the year is a survey of local food writers, industry types, and friends. We asked the group eight questions, from Meal of the Year to Restaurant Standbys, and all will be answered by the time we turn off the lights at week's end. Responses are related in no particular order; all are cut, pasted, and unedited herein. 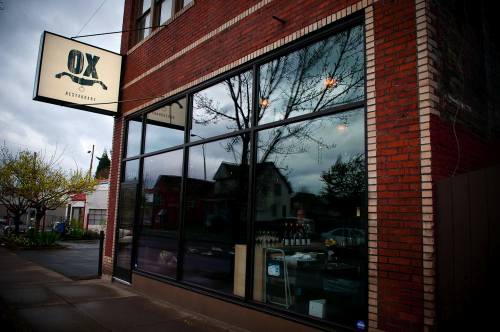 Q: What are the top restaurant newcomers of 2012?

Don Bourassa, community director, Yelp Portland: "2012 brought us a ton of new restaurants but Ox wins this contest by a landslide. I haven't had a single meal at Ox that was anything less than stellar."

Mike Thelin, Feast PDX co-founder and Cooking Channel talking head: "The class of 2012 will be one to remember: Ava Genes and Ox are two of the best and most iconic restaurants to open in Portland in a long time. Smallwares is another gem. I have not been to Roe yet, but everyone whose opinion I trust is raving."

Karen Foley, founder, Imbibe Magazine: [On the year's notable bar openings] "I think two of the most notable openings for cocktails were Imperial and Ox. With Brandon Wise heading up the bar at Imperial, I knew it had to be good, and it is. And I love Ox's cocktail menu — it's creative without being too fussy and it speaks perfectly to the spirit of the food menu."

Michael C. Zusman, freelance restaurant critic: "On the casual side, Lardo is tops. Noisette is wonderful for a fine sit down meal. (And I feel like a hypocrite because it's really close to where I live, but I've only been in for dinner two or three times.)"

Andy Kryza, Portland editor, Thrillist: "To avoid being a broken record and talking about places with bovine- and size-based names (which absolutely rule), I couldn't sing enough praised to Lardo's porchetta, Trigger for making Tex-Mex something beyond a shitty novelty for Texans who won't eat lengua, Penny Diner for upping the ante while chopping the price, Cheryl's for its pitch-perfect comfort food... there was so much awesome it was hard to take it all in. But I think one of my favorite's is also a tragedy, and that's Mack & Dubs, which made rock-solid soul food served by some of the nicest and goofiest (and stoniest) cats in town. Then some jackass racist who apparently hates deliciousness decided to torch the place right as it was hitting a stride. Horrid, cowardly stuff. But in the interest of making lemonade, that does mean the place can make my list again next year, when it rises like a greasy, resin-stained phoenix to fatten us up again."

Chris Onstad, Food and Drink Editor, The Portland Mercury: "Everybody's going to mention Ox, which is well-deserved. I'd like to recognize openings that have gotten less PR, such as Szechuan Chef, for legitimate regional Chinese food that reminds me of San Francisco. Bollywood Theater, for reinventing (in my eyes, anyway) Indian food. Mi Mero Mole and Uno Mas, for offering unusual and objectively good alternatives to standard taqueria fare."

Michael Russell, restaurant critic/reporter, the Oregonian: "2012 was an especially strong restaurant year, with important debuts in Ox, Smallwares, Roe, Paulee, Imperial (for its ambition and potential) and a reborn Aviary (which opened this month last year). We also added quality rotation players in Uno Mas, the Bollywood Theater and Sweedeedee. The too-new-to-review Ava Gene's, with its lovely interior, has been strong out of the gate."

Erin DeJesus, editor, Eater PDX: "Ox, Smallwares, and the return of Aviary. And if I lived within walking distance of the Ocean and Uno Mas, I'd be there every day for lunch, easily."