Share All sharing options for: Noisette Chef/Owner Tony Demes on the First Year 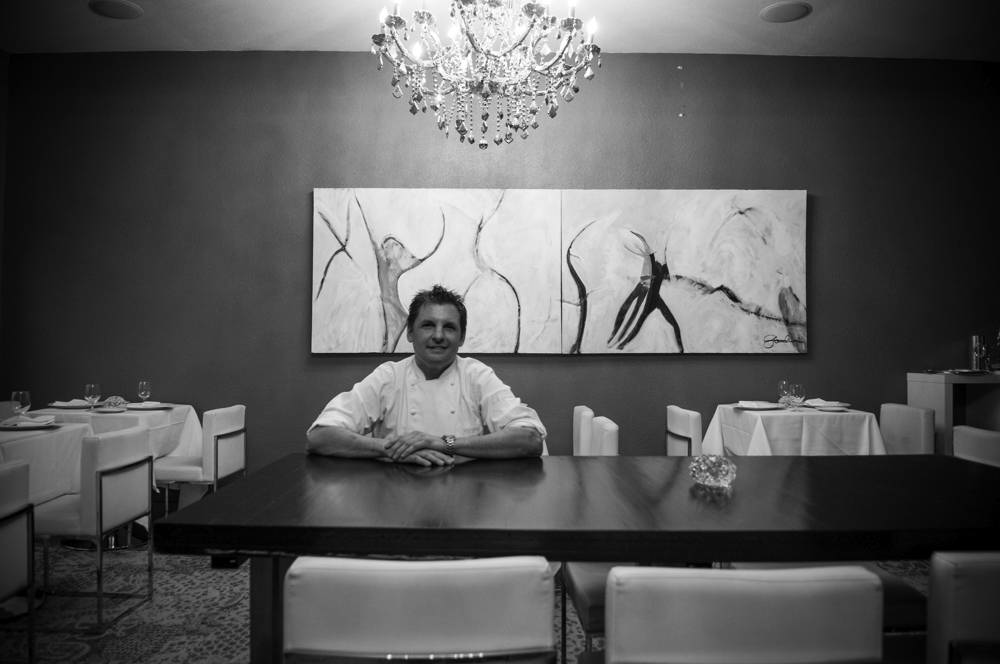 When news of chef Tony Demes' return to Portland began circulating in early 2012, those who remembered his '90s haute French spot Couvron focused their anticipation on his new project: Noisette, a 40-seat fine-dining restaurant right near a highway on-ramp in NW. Twelve months and many rave reviews later, Demes chats with Eater about Noisette's auspicious anniversary, the importance of restaurant real estate, and plans to reveal a less "safe," "more daring" menu in 2013.

What inspired your return to Portland?
I moved here originally in 1992, and after owning Couvron, which I had for eight or nine years, it pretty much always felt like home. I moved back to New York, opened Couvron there — after having that for even a year or so, after doing business in Portland for so long, [I realized] New York is so much more difficult. I'm from New York, and I like New York, but as far as being a chef, it's just so much easier here. I'm a hand's-on, working chef; I like to be in the kitchen. And for me, being that type of chef, Portland just makes way more sense. New York, the hassle of even getting the ingredient... here, if you want to go to the farmer's market, it's easy. Every day, I start my day off, I leave my house and I just drive around picking food up. I pretty much hand-pick most of the things I get. For me, it makes a big difference.

So when you moved back to Portland, did you have the Noisette concept already in mind?
Yeah. Ever since I had Couvron, I'd been thinking about — I love doing tasting menus. Couvron was pretty much only a tasting menu, that was the only option. ... And at this restaurant, at Noisette, my idea was to offer small plates, and then offer a tasting menu — not really a traditional a la carte menu with appetizers and entrees. So, if people just wanted to pop in and have something small, that's fine, or you want to come in and do a full-on dining-thing, that's what we're geared toward.

What percentage of diners opt for the tasting menu?
It varies a little bit, but — it's funny, because after a year, we've noticed that people are definitely going more for the tasting menu. And it seems like [with] our clientele, there's very few people popping in for something small. It's more people that are celebrating something, or serious foodies that are there to dine. So the majority, probably 80 percent of our clientele is more like that. There's a smaller percentage of people that are casually coming in.

Was that surprising to you, the fact that more people are coming in wanting that full experience?
In a way. That was one of the reasons for offering the small plates — it was like, 'Let's see where we fit as far as what people want.' And I think they like the option of being able to have small plates, but once people sit down and look at the menu, a lot of times they figure, 'This makes more sense, because we get to try a lot of different things.' So, it kind of surprised me a little bit. But it's been over a year now, and that's kind of just how it's evolved. We're a little off the beaten track, so we're more of a destination in a lot of ways, not just people walking in off the street.

I was just about to ask: How did you end up in that space? Was your aim always to be somewhere in NW?
My thing was that I wanted to be close-in to downtown. So, not too far out — Couvron was also in kind of in a destination location; not far away, but not in a busy street as far as restaurants go. And the situation with the space we're in now; I liked the idea of being in the NW as opposed to NE or SE, I think it fits more the style of the food. But for us, I'd been looking around a lot, in a lot of places, for probably over a year. Somebody showed me this space when the owner of the building was just looking to lease it, and I looked at it, and thought it was so much work — I'm going to have to put so much work into it, it doesn't make sense. And probably six months later, the owner decided he would sell it. When he decided to sell it, then I [thought], I could do all the improvements I need to do and not feel like I'm spending so much money on something I don't even own. So, we were able to purchase the building. And my one thing is that being a small chef/restaurant owner, for someone like me, one of the biggest attractions is to actually own the building. Because I'm not looking at owning multiple restaurants; I'm looking at having just one... and your real estate is almost like your retirement.

What was the build-out like?
We did a big renovation, in some ways. We didn't do anything like moving walls or anything like that, it was more of a really heavy remodel. Myself and my wife did everything — the only people we hired out were to have a few doors hung. The cement work outside, we ripped all that out and had a wall put up and put in a cement patio. It was pretty involved. We tiled the kitchen, the kitchen floor, we put in a new hood, put down the flooring in the dining room. It took us about seven months... [During build-out] people used to come by and ask, Are you tearing the building down? Because it looked that bad. It looked like it was just getting ready to be pulled down, at one point. [Laughs]

Looking back, would you have done anything differently? I know you just did a minor revamp of the dining room.
That's the one thing. From the very beginning, I was looking at the space, and where our bar was — where we have the chef's counter now — I was thinking, 'This should probably be our cold area. But we have the whole back of the kitchen that's more like a prep area. And I'm like, this is kind of crazy because we have all this empty space back there, and we need to put the bar up top.' So, we had the bar there. The renovation we did about a month or so ago, we basically moved the bar to the back, so we have just the back bar — we don't have an open bar you can sit at anymore— but we have a chef's counter, and that's our cold station. And that's probably what we should've done from the beginning. It kind of worked out. It works a lot better than what we originally had set up.

Do you remember how opening night went?
Not too too bad. [Laughs] I've opened quite a few restaurants, and if you waited to open until everything was perfect, you'd probably never get open. So, for me, I'm always kind of working on a shoestring — I've never had an investor or anything like that — as you get close to being ready to open, you just pick a date and go, 'All right, we're just going to go for it.' We had a few nights where we did friends and family, and our first night of actual service, it wasn't too too bad. To be honest, it's one of those things you just want to get through it, and hope for the best. And it wasn't too bad. [Laughs] I've probably blocked it.

Let's talk about the reviews. What was your reaction to getting those first positive reviews?
I was really, really happy. A friend of mine was working at the Bent Brick as sous chef, and he was also working with me on the weekends, he'd come help us out. And he would laugh about the reviews, he's like, laughing at me: 'I can't believe your reviews.' I said, 'Listen, if someone asked me to write my own review, I don't think it'd be as good as the reviews I'm getting.' I was really happy [Laughs].

And at one point I was nervous — in the past, I remember if Willamette Week came out with a really good review, usually, the Oregonian might pick some other things apart. So if the Willamette Week [verdict] was great, maybe the Oregonian's wouldn't be so good. And I was kind of worried about that — 'Willamette Week was so good, I wonder what the Oregonian's going to be like.' But the Oregonian was great, too. I've been thrilled. All of our press has been really positive. Of course, we read everything... anything I read about what we're doing, you always try to improve. So I don't look at it like, 'Look at these reviews, we're doing perfect, we don't need to change anything.' We're always trying to improve on what we're doing.

Did you make any changes to the menu over the past 12 months?
A little bit. I was pretty lucky, because the staff I opened with pretty much stayed for a year, maybe a little bit more. And I have a completely new kitchen staff now. After the new year, we're getting ready to revamp the menu again a little bit. Not any major changes, but just to freshen it up, liven things up a bit. Not that much is going to change — I'm not really into the molecular stuff, it's not really my style — but as far as combinations of foods go, I'd like to get a little bit more daring with what we've been doing. We've been playing it pretty safe. Ooh can you reveal any examples? I'd like to look into more things like... combining different flavors of seafood and meat. For example, doing foie gras with lobster, something like that maybe. There are a lot of combinations that are fun to mess around with. Scallops with duck and different things.

And finally, our usual final question: Does it feel like it's been a year?
It went by really fast. I guess, in a lot of ways, no. It feels more like three, four months. It's hard work, but it flies by.
· Noisette [Official site]
· All Previous Noisette Coverage [Eater PDX]