As is the tradition at Eater, our closeout of the year is a survey of local food writers, industry types, and friends. We asked the group eight questions, from Best New Restaurant to Best Dining Neighborhood, and all will be answered by the time we turn off the lights at week's end. Responses are related in no particular order; all are cut, pasted, and unedited herein. 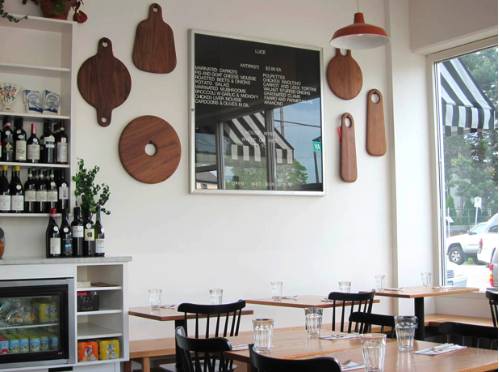 Q: What was the biggest dining surprise of 2012?

Allison Jones, Portland Monthly/Eat Beat blogger: "I was pleasantly surprised that Bon Appetit's Andrew Knowlton had the chutzpah to honor John Taboada's Luce as one of the 10 best new restaurants in the US this year. He certainly didn't phone that one in — I don't know a single food writer in town who would have put it on a shortlist if asked by a national rag. Not that Taboada doesn't deserve the attention — I've enjoyed several killer meals at Luce — and I'm always game for surprises."

Chris Onstad, food and drink editor, The Portland Mercury: "I was surprised by how much I ended up liking 24th & Meatballs. A lot of Tabla's talent and finesse goes into their deceptively simple menu, and the value is first rate. They do one thing and just nail it. I was also surprised by the number of pop-up dinners available, and the incredible quality on offer. They're increasingly a reliable way to go out for an exciting meal and get much more than you bargained for."

Don Bourassa, community director, Yelp Portland: "Feast. I was so afraid it was going to be too 'New York' and not 'Portland' enough. But events like the Night Market proved to be pretty epic. And the food made by local chefs out-shined a lot of the offerings from those vaunted 'celebrity' chefs from out of town. PDX > Everywhere Else."

Karen Foley, founder, Imbibe Magazine: "The fact that the stretch of N Killngsworth by PCC still didn't attract a great restaurant. I've lived in North Portland for 13 years now, and I've never seen a street be slower to draw good eating/drinking spots. There are a couple of great coffee spots, a great beer spot and a dive bar, but can we please get a killer restaurant/cocktail bar over there?"

Michael C. Zusman, freelance food and restaurant writer: "Riffle NW hands down. Crappy space, low expectations for new-ish operators. Yet they have done a great job in there and actually come through with a seafood focus in a town where it's tough to sell anything beyond salmon and halibut."

Andy Kryza, Portland editor, Thrillist: "That a chef of Vitaly Paley's caliber would open not one but two restaurants. Next door to each other. And that one would be inspired by low-end NYC diners specializing in hot dogs and fries served alongside soda jerk-inspired cocktails. And that everything would be so fu**ing good... you wanna put some foie up on my turkey poutine? I love the ladies, but I'm surprised I didn't try to make out with that dude when he served that wonderful slop up."

Mike Thelin, Feast PDX co-founder and Cooking Channel talking head: "Both Andy [Ricker] and Matt [Lightner] went to NYC, a noted graveyard of many successful chefs. Both not only succeeded, but thrived with ambitious concepts that NYC hadn't seen before. This didn't surprise me, but it definitely surprised the haters — and made a huge statement about the talent pool in PDX."

Erin DeJesus, editor, Eater PDX: "I agree with so many of the sentiments here (the general goodwill towards Feast; Luce; Corazon). One that hasn't been mentioned is the success of the Ocean — I'm thrilled that what's essentially a strip-mall-style 'food court' on paper has blossomed into a great site for casual dining. Also surprising: that national media continues to 'discover' Portland, and the sheer amount of Portlandia metaphors that result."