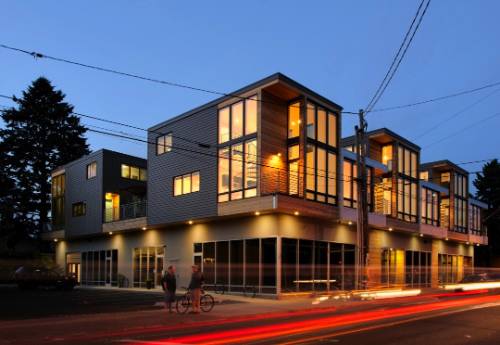 Q: What was the best dining neighborhood in Portland in 2012?

Andy Kryza, Portland editor, Thrillist: "Division (Rickertopia) blew up, but the most interesting developments happened on MLK and Williams, which continue to grow into home of some of the best restaurants in town — and where restaurants seem to have formed a great community among themselves with the common goal of shelling out amazing food and great atmosphere."

Chris Onstad, food and drink editor, The Portland Mercury: "I don't see that long stretch of Division as a 'neighborhood.' The Alberta blocks between 14th (with the Cultured Caveman and Minizo carts) and about 30th (winding down just after Enzo's), blends together, is easily walkable, has all the parking you need, and has hit critical mass: it has a very high restaurant head count now, a competitive environment that will serve diners well in 2013."

Don Bourassa, community director, Yelp Portland: "SE Portland still wins, and has been doing so for years. Downtown (SW) seems to be throwing a strong fighter in the ring for 2013, though."

Michael Russell, restaurant critic/reporter, the Oregonian: "Sure, SE Division is the correct answer. But I'll be a contrarian (again) this year and say NW 21/23. In the past few months, I've had some heavenly brisket at Smokehouse 21 (which, on its best day, approaches Podnah's), fine sushi and top-notch seafood charcuterie at Bamboo's second location (now with more sustainability), excellent pastries at Ken's Artisan Bakery (Portland's reigning croissant king), a Sterling macchiato at M Bar (a cafe by morning, a beer/wine bar at night) and, why not?, Portland's best movie theater popcorn at Cinema 21 (apologies to NE's Hollywood Theater). You can still have fine meals at standbys such as Bar Mingo and Paley's Place, and Ringside Steakhouse's sunken bar is a blast from the Mad Men-era past. It's a neighborhood I don't visit often, but when I do, I'm frequently impressed."

Mike Thelin, Feast PDX co-founder and Cooking Channel talking head: "Division. It just gets better and better. And with Duane Sorenson opening another place, and Andy Ricker's curry house on the way, it's going to improve even more."

Erin DeJesus, editor, Eater PDX: "Is this getting repetitive yet? Another vote for SE Division here, for the same reasons already articulated. I'm excited to see, though, the development of downtown's West End — with the ground floor of the indigo|west building filling up and Tasty N Alder set to open, it'll be interesting to see if people finally know where the 'West End' is."
· All Previous Year in Eater 2012 Coverage [Eater PDX]

As Roe Closes for Good, Its Final Chef Takes Over the Space With Fine Dining Spot Tercet