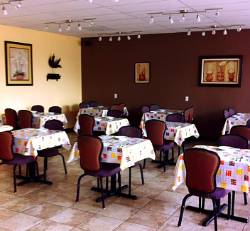 For Breakside Brewery's brewmaster, Ben Edmunds, passion for beer began in his early 20s, as he explored craft brewpubs up and down the east coast while studying at Yale University. After moving to Portland in 2008, Edmunds decided to step up his passion for beer from hobby to career: He pursued a formal brewing education by attending America's oldest brewing school, the Siebel Institute of Technology in Chicago. Edmunds returned to Portland and worked for Upright Brewing Co. until the winter of 2010, when he connected with Scott Lawrence, who was planning the opening of Breakside Brewery. Now Breakside's collaboration-happy brewmaster, when Edmund's not drinking or thinking about beer, you might find him at an under-the-radar Thai spot in Southeast Portland.

Since we've started building our new brewery and taproom in Milwaukie, I've been spending a lot of time driving between the pub in Northeast and the new location. Any time that I have the chance to stop along the way for lunch, I make my way to Manao Thai restaurant in Sellwood. What looks like a non-descript, strip mall restaurant is easily one of my favorite spots in the city, and what the space lacks in ambiance it easily makes up for with amazing, uncommon Thai dishes and insanely friendly service. A couple of my must try items on the menu? How about the pork knuckle, which comes with an addictively good sour chile dipping sauce. And for noodle dishes, skip the lunch specials and go for the stir-fried salted duck egg with glass noodles and ground pork. If this place were in any other neighborhood in the city, I expect there'd be a line out the door — and deservedly so.