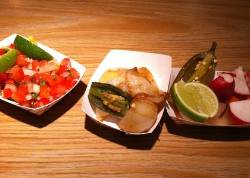 Originally from San Antonio, Texas, Broc Willis, executive chef at downtown's Southpark restaurant, grew up with slow home-cooked meals and family vegetable gardens. After working at a variety of restaurants in Texas, Willis realized that he wanted to make food his lifelong career and moved to Portland, Oregon to attend the Western Culinary Institute. Upon graduation, Willis worked in several kitchens around town including Pazzo Ristorante before settling in at Southpark in 2003. He quickly worked his way up in the kitchen, and in late 2006, was named executive chef. But while fine dining may be Willis' forte, when he's craving a bite after work, he craves spice and routine — to the tune of Don Pedro in Gresham, someplace he's been going every Friday night for years.

"There is really only one restaurant that I eat at regularly: Don Pedro. It is a hole-in-the-wall Mexican restaurant right off the max line on 188th and Burnside in Gresham [one of several Portland locations]. I commute to work on the MAZ line, so after closing dinner service on Friday nights at Southpark, I always look forward to my ride home because it means a stop at Don Pedro for a late-night burrito. I usually order the carne asada or pastor. And I always order the pickled carrots with jalapeno and radish. After a week straight of working in the kitchen, I crave no-frills, spicy Mexican food. Don Pedro is consistently satisfying and delicious."