Cocotte's Liebman, Hackett, and Hackett on One Year In

Share All sharing options for: Cocotte's Liebman, Hackett, and Hackett on One Year In 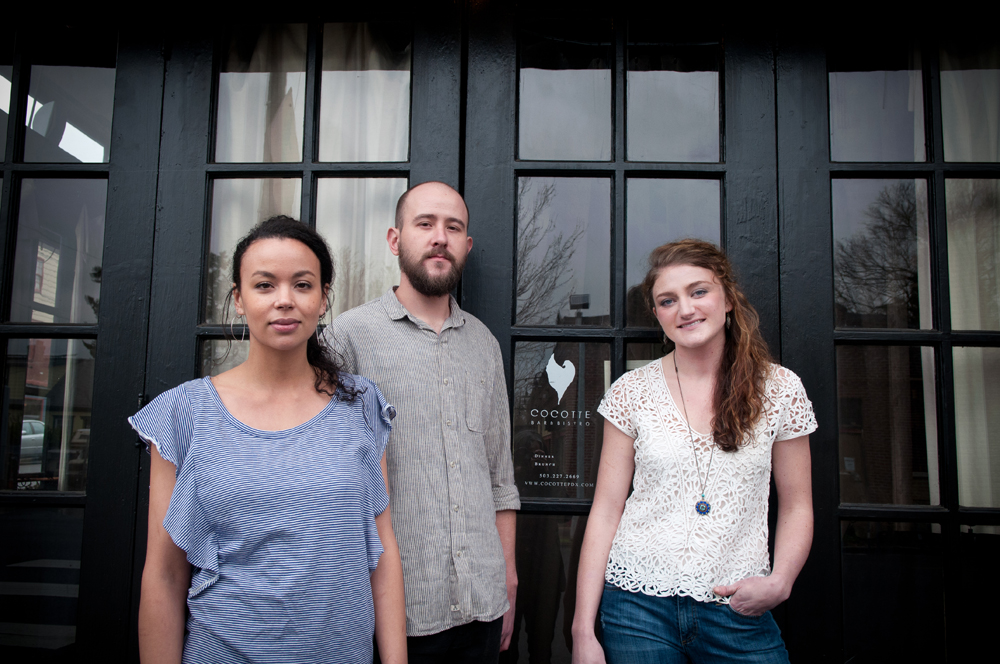 In fall 2011, news spread that Micah Camden's NE Killingsworth gastropub Fats was on the outs — but contrary to the popular rumor, the space wasn't destined to become an outpost of the Little Big Burger chain. Instead, upstarts Kat Liebman and Zoe Hackett, both alums of Lucy's Table, snatched up the space to start Cocotte, a casual, vintage-inspired bistro. "Our first love and desire for this place... is to give people, for lack of a better comparison, a European dining experience," Hackett says."You feel like you can go every night and get whatever you want, you're not forced to get a whole something — celebrating the experience of what it is, unpretentiously." Liebman agrees. "It's like that Old World approach."

On the eve of their first anniversary, Eater chatted with Team Cocotte — Liebman, Hackett, and bar manager Levi Hackett — about menu development, surprise holes in the wall, and Cocotte's evolution into a French bistro.

How did the first conversations about Cocotte start?
ZH: We both had other aspirations in opening our own place, and the concept seemed to fit well together. Originally we wanted to go the route of prepared sauces and do our own pantry-style line of tasty things. And the business plan just kept expanding: Pretty soon, everything we wanted to do — from the packaging to the type of food — ended up being big enough to be a restaurant concept. Once Levi got in the mix with his knowledge of beer, wine, and cocktails, it just kept developing.

What was the time frame like, from these early talks to when you starting actively looking for spaces?
KL: Very quickly. When we were working on the business plan, it was kind of an organic process. I reached out to a bunch of brokers, just to get the word out there that we were looking for something — and coincidentally, when Zoe and I decided to leave Lucy's, this place became available, and it just kind of came together.
LH: It was literally one day after they quit Lucy's Table, this place became available.
ZH: It was kind of beaten down and weathered and not really taken care of, so it was really nice to be able to take care of an old, beautiful building and put our touch on it.

How familiar were you with the neighborhood? Was there any apprehension with joining this "Restaurant Row" — moving next door to Beast, DOC, and these extremely established restaurants?
ZH: I did my externship, upon leaving Oregon Culinary Institute, at Beast. So, I would always walk by this building.
LH: It was intimidating, of course. I think we knew our concept was different, not interfering with their business but being a part of something we really love, which is this street.
KL: I think it totally fits with what was already established here. We're all different enough that there's a good amount of variety on this little corner. The other thing is that we — other than Yakuza — we have one of the only full bars.
LH: There's good interaction, too, because we're all so small: When we're full and someone else is having a slow night, we always send them over. We support each other.

What was the build-out like? Any surprises?
KL: It was fun. Crazy but fun.
ZH: We did everything, as much as we could, by ourselves, and made our own decisions — and stayed up drinking whatever beers were left in the building when we got it, trying to stay awake and motivated. We didn't do a lot of demolition — we had people help us with bigger projects, like plumbing and electrical. But we had fun.
LH: The biggest project was the bathroom. It felt like you were in a pub in England, it felt like you had to walk outside the building, you had to step up — we had to totally redo that. ... There were surprises everywhere — things hidden. We took off that picture [above the take-out window by the bar], and there was a two-by-two square hole.
ZH: But nothing major — we didn't have any huge setbacks. But our days were full for three months. We closed it on Thanksgiving, and we were open by February 21 for a private party for a friend. It was three months and we didn't get a break. When we quit Lucy's, we kind of thought we'd have a couple months off of looking and to continue to build our business plan, and within one day we were heading towards signing something.

How did you collaborate on those early menus?
KL: It was mostly inspired by the season. We started thinking about what flavors we wanted. Generally, we get inspiration from really classic French recipes, then try to put our own spin on it, make the flavors more innovative — or use an innovative technique to get across those classic, clean flavors. That's kind of our approach all the time, and that's probably where we started.
ZH: Now, it's like we're thinking the same thing when we're planning a dish. It's very organic.
KL: One of the things that really inspired us on that first menu was the milk-fed chicken from Eat Oregon First. We thought it was so cool that we could showcase this really interesting technique of raising these chickens — that's why we did the confit leg and pan-roasted breast, the poached egg.
ZH: That became our signature dish and we don't even have it on the menu anymore. People ask for it every night and we sell out... we get about 20 [chickens] a week and they run out pretty quickly. That dish was the starting point, and it only continued to hone in our style of cuisine, which is, we try to focus on seafood and small fowl and lots of vegetable-driven dishes. Things that are somewhat more sustainable, delicate flavors, earthy... that chicken started everything, because it has the egg, farro, the market vegetables, and two techniques on the half-bird... when we started to put that dish together, it just seemed to explain it all.

How exactly does collaboration between the two of you work, generally speaking?
KL: It's a very open-ended conversation. Usually we have the same picture in our head of what it's going to be, but if that doesn't happen, then we like to test recipes out or try to come up with a recipe to make it work.
ZH: The classic example is how many times we come up with something and it's usually, one of us will start remembering something they've had when they were a child. And both of us had really different childhoods, [but] all of a sudden we both get this picture in our heads and it's pretty much the same... we'll just both get it, and that'll be a good starting point. And that comes up a lot.

When you first opened, there was an early perception — to sort of fill in the "three's a trend" trio with St. Jack and Little Bird — that Cocotte was a strictly French bistro. And I remember that you didn't necessarily see yourselves that way.
KL: Maybe we've been evolving more into a French bistro since we started. But the first mock-up menus were more Pacific Northwest. We took inspiration from classic French recipes, but it had some Italian influence, some regional American influence. It still does a little bit, but it's more muted. The French affect is more pronounced now.
ZH: The original intent was based on our experience, the menus and restaurants we worked in the past were more American. It was almost like we didn't want to bite off and say "strictly French" before we really developed it.
KL: I think we've come farther away from that point. We were so fresh out of our last experience that it was still influencing us a lot. And now we've come so far from that, we've really developed our own style.
ZH: Just a natural progression, I think. But it was weird — we were stuck in our own world with this place, all we could think and talk about was creating this place — and we had no idea that Little Bird and St. Jack were opening up at the same time we were hammering away.

Is there anything about the space you wished you'd done differently, or major changes you had to make maybe a month in?
KL: We had it set up pretty well when we first opened — it's hard to say, because we're constantly finding ways to change things for the better. It's a daily process.
LH: That's been our biggest issue, I think — the size of the space. Every single inch of it you can see, there's no storage area. We're constantly re-organizing and trying to figure out... such a limited space.
ZH: We've done a lot of kitchen re-organizing. We started out very cramped, and we've been able to saw a butcher block in half and set up a back fridge. All really strenuous projects, but totally worth it: Otherwise, Kat and I were imprisoned to be the only people cooking back there, and now we're able to train other people.
KL: When we started bringing more staff in the kitchen, that's when we realized — we had already re-organized the kitchen once at that time and thought it was good, when it was just us two. Then we brought someone else in and [realized] we needed to do it again.

So, how did the opening go?
LH: It was good. I remember the parties and the soft openings more than I remember the March 5 opening. I know it was good because people knew about it.
ZH: No major disasters in the kitchen. We filled out a few times, then I remember some slow March nights when we were open and only had a few tables. But that's to be expected. Being our first time and everything, we really didn't know what to expect.

For more One Year In posts published today across the Eater Universe, head over to Eater National.