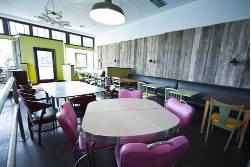 Image of Skelly and the Bean by S. Pratt / Eater Seattle