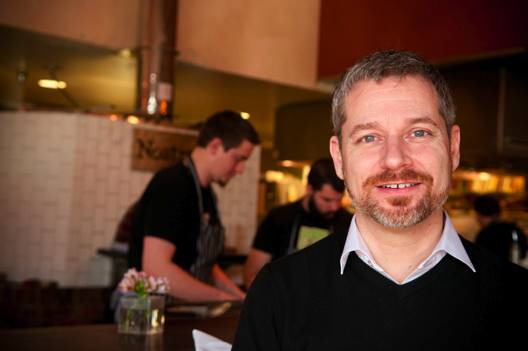 Thanks to the shine of a couple James Beard nominations, Cathy Whims' SE Italian restaurant Nostrana often ends up completely booked on weekends. Eater caught up with general manager Jeffrey Murray — a 30-year industry veteran of spots like Boston's Rialto, New York City's Gramercy Tavern, and Vermont's Shelburne Farms — to talk about the best time to snag a table, some famous regulars, and working to change Nostrana's onetime reputation for having less-than-stellar service.

What's the most difficult time to get a table?
7 o'clock on a Friday or Saturday. Friday and Saturday night, we'll reserve the whole restaurant if we can. We'll leave the bar and pizza counter open for walk-ins, so you could walk into a 10-minute wait for one of those seats or an hour wait for one of those seats. Fridays and Saturdays, if you get in a 5pm, you can often walk-in to a table. But once we get beyond that 5 o'clock hour, it's difficult to walk in. How far in advance to you recommend one call in for a reservation? Fridays and Saturdays tend to start selling out a week ahead. That prime time, 6:30-8pm, starts going five days to a week [ahead of time].

What's the reasoning behind res-ing out the whole restaurant? Lots of times you'll hear restaurateurs say they make a point to leave, say, half the restaurant open for walk-ins.
We go back and forth. We're not online reservations yet, we don't use OpenTable or [take reservations] through our website, so I feel like it's a really good contact with our clientele. It's a great opportunity to provide service before they even step a foot through the door. And we really pride ourselves with being on time for reservations. But I feel like if people are taking the time to call and make a reservation, we should honor that. So, we'll reserve the whole restaurant — we do keep the bar and pizza counter open and don't reserve those spots at all. So, that's 16 seats total.

Let's say I walk in and am out of luck. Is there anything I can do to make that wait shorter?
Not necessarily shorter — but we'll bring people drinks and glasses of wine up front [in the waiting area]. Cathy actually works the door on Fridays and Saturdays, which is really fun, because it gives people a chance to talk to her about the menu or what's going on at Oven & Shaker. And actually, a lot of times, it ends up feeling like a party up front... I actually really enjoy having this buzz up front. I don't know that we can shorten the wait, but you can certainly have fun while waiting.

Tell us about some of your regulars.
We have several people that are here every week. Without fail: Same time, same table, and some of them have been coming since the restaurant opened. That's been fun, to get to know those people and hear their views about how the restaurant's changed, how it's evolving.

What about fun VIPs?
Kathy Griffin came in when she was in town. That was great — she was super nice, chill. When Portlandia is shooting, we see a lot of folks in the show that come in. Lorne Michaels — they came in and had their wrap party [for Portlandia season one], so we had everyone that was already in town, plus Lorne Michaels, here. That was really cool. We get a lot of industry people from other cities that come when they're in town. ... Oh, Tom Spanbauer is a regular here — he's an author — and he comes every week. He came in [once] with John Cameron Mitchell and the cast of Shortbus. So, we had the entire cast here and had a lot of fun with them. That's probably the most fun we've had with high-profile [folks].

You get a lot of out-of-towners here. Having worked in New York and Boston, are diners' expectations different in those larger cities, and does that effect their experience coming in?
You can dine so many ways here — you can have a pizza and beer and be out in 45 minutes, or you can come have a long, luxurious meal. I think people from big restaurant cities come and do the latter. They're looking for courses and wine pairings... Something that I wish [Portlanders] would do — oh god, what am I inviting here? — but I love to fix things. I find that people will often suffer through their meal if they're not enjoying it. If there's something wrong, they'll eat it anyway rather than saying something. But I would so much rather get them something else and they'll leave having enjoyed their meal and feel taken care of — rather than suffering through what they're eating.

Tell me about some of the crazy requests you've gotten from guests.
[Laughs] People want to take — our birthday celebration for people, the flaming chicken that comes to the table — people always want to take them home. We buy them through the farmer's market, so we [had to] stock up at the end of the summer. We have actually started to sell them, because people want to take them home all the time, they'll end up in people's bags. And the scissors. People want the scissors. At the inn where I worked, we had a group that came the weekend of the Kentucky Derby, and they decided an hour-and-a-half before the race that they wanted mint juleps in silver cups. Which we didn't have. So I ended up going to Bed Bath & Beyond and buying silver toothbrush holders. I love trying to take a situation that can potentially be difficult and turn around and solve it.

So, to be frank, Nostrana at one point had a reputation of...
Having terrible service. That's something my predecessor, Liz Davis, really addressed. And I feel like there was a concerted effort from everyone in the restaurant to change that. So, I've tried to take the things that she did and run with it: There's no end to how much you can improve. I feel like we've gotten rid of that a bit. I hope we've gotten rid of that a bit... I work with a really amazing group of people, and they like being here. That's a comment I get a lot, and is gratifying to me as a manager, people coming up to me and saying, "We really loved our dinner. It's really nice to see people enjoying their work." What are some of those examples of small fixes? For me, those things are all really about attention to detail. Paying attention to how your tables are proceeding, and adjusting your service... That's something we talk about a lot: Reading your tables and being proactive about what their needs are.

Finally, what's your must-have Gatekeeper tool?
I think just being approachable: Being able to listen to somewhere whether they're angry or excited to be here. I hope that people can feel like they can let me know if someone's going wrong or something's going right, I feel like I'm approachable either way.

For more Gatekeepers published today from across the Eater Universe, head over to Eater National.