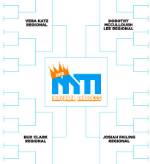 WWeek's getting in on the bracket game with its "Mayoral Madness" tournament, pitting famous Portlanders against each other to "elect" a new mayor via the most democratic means possible. And today's bracket is particularly foodie-friendly: After a scandal involving her competitor, Nong Poonsukwattana takes on a Voodoo bacon bacon bar in her first-round heat; while Andy Ricker and Gabe Rucker face off in a duel between mean who cook wings and pigeons, respectively. [WW]