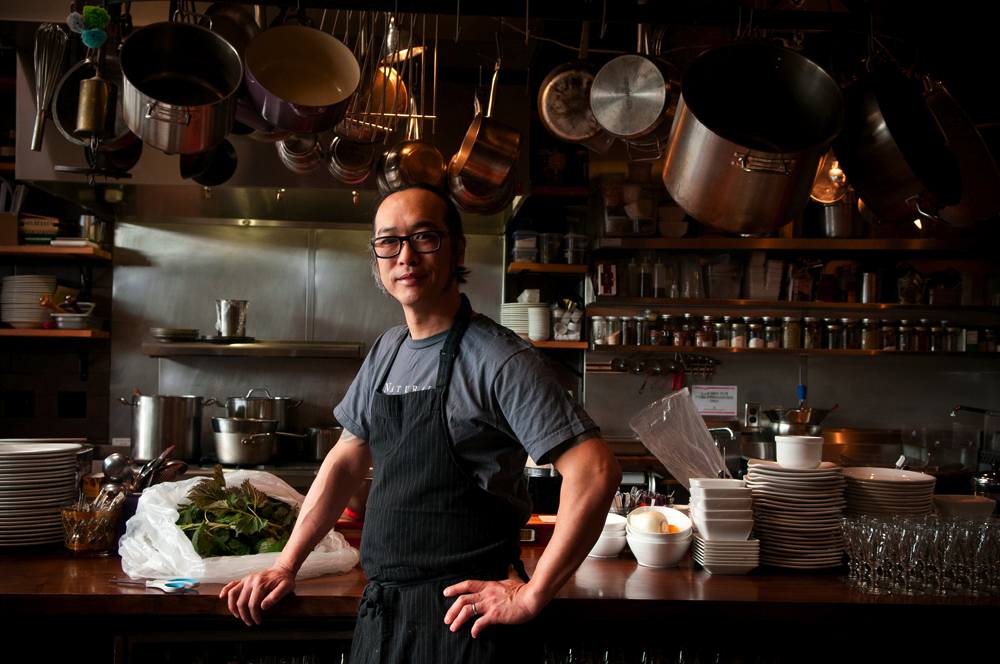 After owning NE Alberta's casual vegan spot Vita Cafe for nearly seven years, chef Aaron Woo branched out into a neighboring space — in a big way. The all-vegetarian fine dining restaurant Natural Selection, which opened in March 2011, quickly collected accolades for its upscale, seasonal treatment of vegetables. Eater recently chatted with Woo about the early concepts for the space (think casual supperclub), collecting skills down in Napa Valley, and what's next for NS (hint: it's bad news for brunch fans).

When did this space first open up, and when did the idea for Natural Selection start forming?
Last summer, for June and July, we were searching Southeast for a second Vita Cafe location. We actually went into contract a couple of times, and it ended up falling through at the last minute. So, we spent a good six to eight weeks really shopping hard, and we were exhausted — that alone is taxing, let alone running and operating a business [at the same time]... We decided to table everything, take a breath, and go on vacation. We were literally driving out of town and we saw a moving van in front of the space...

What had been here previously?
It was a belt and jewelry shop, just retail, no kitchen. It's the same landlord I have at the Vita, and he said, "I'll give you first shot, you have until the end of the month to let me know if you want the space." We basically spent our vacation brainstorming ideas for the space, across the board: Do we expand the Vita? Do we do a takeaway deli-style thing, with pre-made meals? Or do we do a new concept? And at the end of the trip, we decided we would explore a new concept. We ended up thinking about doing a casual, trattoria-style supperclub — maybe family-style, maybe plated. But really simple, country peasant comfort food. And we went down that road before we went out eating and exploring. It was an interesting exploration, because I had been out of cooking for five or six years... for me, it was like this reintroduction to what people are doing with food now.

At what point did the concept evolve from trattoria/supperclub into its current incarnation?
I signed up for a couple courses at CIA at Greyston in St. Helena [California], and at the same time ended up staging at [Napa Valley's] Ubuntu with Aaron London. And that really opened my eyes to what cooks are doing these days, and the pulse of the culinary scene as far as fine dining goes... and that changed the way I thought about food. I think in general the level of the culinary standard has risen so much now. In Portland specifically? Just in general, the food that you get when you go to a restaurant is so much better than it used to be, and everyone needs to step it up. That was part of my awakening, [realizing] "Oh wow, we need to step it up to be on par with all the top chefs in town."

Tell us a little about menu development. It's obviously vegetarian, but it's also kind of unorthodox that there are only eight items available at a given time.
A lot of people say it's unorthodox, but I don't really think so. ... We are committing to having only eight items every week, and that's not new. I think the difference for us is that we're doing it in a vegetarian style without promoting ourselves as being "the vegetarian place." It's just fresh food. We care about it, we love it, and I think it really does show.

How did build-out go? Any major surprises?
The thing I've learned over the years is that regardless of the size of your restaurant, whether it's 30 seats or 100 seats, the build-out's pretty much the same. But it's not really easy. I knew that going into it, so I didn't take it lightly. That said, it's a really limited space, so your design is limiting — you don't have 3,000 square feet to work with where you can keep changing it. When I designed the Vita, I had so many different options and trials and errors, but here, it's kind of set up for you. It's obvious the kitchen goes here, it's obvious where the bathroom is. In that regard, it was a lot easier.

So, how was the opening?
The opening was definitely stressful — I've never been through a restaurant opening or closing that wasn't stressful and chaotic. I had a great crew, so everyone knew that and expected it to be crazy. And it was. It was legitimately crazy, enough to say I don't know if I would do it again. There was a point where — on opening day, we were having a gas line inspection and the inspector forgot about us. We had an appointment at 10am and at 4pm, I got a call from the inspector saying, "I totally forgot about you." We went the whole day without the stove — so I was doing a lot of prep either on little burners or running back and forth between the Vita kitchen and here. At four o'clock, we got the inspection done, and we opened at 5:30. At about 5:15, our oven went out, and I didn't have an oven for the first hour of service. So, that was pretty stressful. But that was the first day, and we recovered and made it through the first week.

And the other thing about Natural Selection is there's not a lot of options as far as "What are we going to do next?" At a lot of restaurants, it's "We're going to do dinner, then we're going to do lunch, then breakfast or brunch..." I really have no intention of doing brunch, for sure. Or lunch. We spend the whole day here prepping for dinner, and that way we can really be prepared and do a quality dinner in a nice, relaxed calm atmosphere.

Was there a moment when you recognized the buzz building for the restaurant, and saw that reflect in the dining room?
The summer was definitely a slow ramp-up. [...] We didn't put it out there to the community for that big grand opening. We opened the doors and let the word-of-mouth come — I didn't want to overhype Natural Selection. [...] The big uptick for us was late summer/fall, we started getting a lot of good, regular press — it seemed like every three or four weeks, something hit the media that was really positive for us. So it started building a constant momentum, which was the big concern for me — having friends who are chef/owners of small, independent restaurants, the fall is always the scary point for everyone. Business is slower, the growing season starts to slow down... and coincidentally, the media started picking up on us, and we went into the fall stronger than we were in the summer.

Does the whole vegetarian/vegan label bother you, in terms of how it changes people's expectations of the restaurant?
It doesn't bug me. I'm not surprised — just sit down and let me know how you feel after the meal. In that regard, I'm just really confident in what we can give people here. Are there people who don't enjoy it? Probably. But we do our best to stay true to who we are, and hopefully people will pick up on that and appreciate it. '

Do you hope to get to the point where people can talk about the restaurant without the "vegetarian" label so strongly attached? Or is it part of the story? I think it's definitely part of the story. This first year, part of why we were so regularly picked up by the media is because it is a good story. I think people are catching on that it's an awesome vegetarian restaurant, but it's a passionate seasonally focused restaurant. And it's not like restaurants in Portland aren't like that — most of the fine-dining restaurants are like that.

And finally, does it feel like it's been a year?
It feels like it's been a really long year. Definitely, I'm glad that year has come and gone. Working seasonally, now I've got a whole cycle under my belt. And it's not that, "Okay, now I just start over and do the exact same things I did last year," but for me, after not cooking for six or seven years, having that whole season under by belt gives me a lot more confidence. And it just makes me feel better about my space.
· Natural Selection [Official site]
· All Previous Natural Selection Coverage [Eater PDX]
· All Previous One Year In Coverage [Eater PDX]