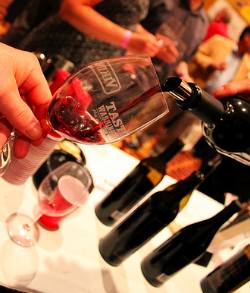 SEATTLE: The two-day uber-exclamatory Taste Washington! food and wine event takes place this weekend at CenturyLink Field Event Center, with more than 200 participating wineries and promised bites from over 50 local restaurants (including RN74, Molly Moon's, and Copperleaf). Two boldfaced names are guiding the weekend's food and wine pairing seminars, with Beard-nominated chef Jason Franey of Canlis and empire builder Tom Douglas leading panels on Saturday and Sunday, respectively. Tickets ($75 per day, or $99 for a general admission weekend pass) are still available here. Extra bonus pro-tip: For those making the trek and need to sober up with some comfort food, the Surly Gourmand drops by Eater Seattle to offer up his list of the city's best lasagna dishes. [EaterWire, -ESEA-]

SEATTLE: Seattle Met reports that the iconic Le Gourmand — which announced in February that it would shutter permanently in June 2012 — has unveiled a "greatest hits" menu of sorts, featuring past favorites from the restaurant's 27 years. The "Le Gourmand Menu Classique" offers a three-course prix fixe for $60, and will be available until Le Gourmand's official closure on June 2. [Nosh Pit]