Oregon is home to a lot of restaurants, bars, wineries, and breweries, but there are tons of hidden gems that the majority of Portlanders aren't unearthing. To help guide us to these potential discoveries — including some surprising dishes at familiar favorites — we've enlisted some of our city's many food players to share their recommendations for a weekly feature dubbed Dining Confidential. 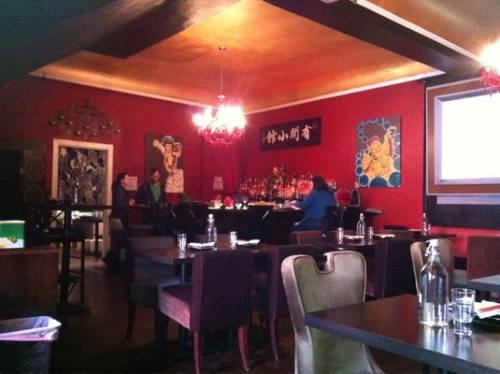 Boke Bowl chef Patrick Fleming's right-hand man, Tamer Riad, moved to Portland with his family from Cairo, Egypt in 1997. Academically driven throughout high school, Riad entered college as a biology/pre-med major. In an effort to distract himself from his studies, Riad started working at the Oregon Golf Club in West Linn, where he first met Fleming. "But that was still a few years before the Boke Bowl pop-ups began," Riad says. "[Then] I was my own personal version of a pop-up chef for a handful of years — Genoa, Bay 13, the Original, Beaker & Flask, not to mention my various attempts at escapism: SF, NYC, the Virgin Islands..."

Throughout these adventures, Riad and Fleming kept in touch, and currently find themselves back together at Boke Bowl in inner-SE Portland. But despite his travels, Riad's only been able to find one special bite — cold pig ear — at a SE Hawthorne favorite.

Having lived in SE, I started frequenting Lucky Strike off of Hawthorne and 39th. I heard that they had an original location in deeper SE, but I never had the chance to make it out there within the time they moved closer in... but once they did and I tried their pig ear salad, I became a follower. This is the place for proper Sichuan food! Their food is incredible and their bar is equally as fantastic. Only here have I ever encountered a pig ear that was not served hot, and I love everything pig ear. Its texture is so soft and snappy, perfect with its chili-oil bath and sesames (a side of rice is recomended to soak up the love). I've definitely got my favorites now like their dan dan noodles, which are just fun to say, and amazing with spicy ground beef and scallions. They have a handful of simple dishes that I have found to be the most exciting. The "Chive and Egg" is excellent; [as are] the "Beans and Beans" with long beans and fermented black beans; and Guinness pork ribs, or as I've come to call them, "meat candy" — everything with a healthy helping of sichuan peppercorns. The room is super cool and there's usually an old Jackie Chan movie playing silently in the background, fantastic entertainment even by yourself. Their staff is super friendly and really know their stuff. I'm probably going to head over there now and finish with dessert drinks at the Aalto Lounge down the street.