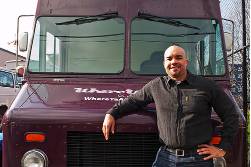 SEATTLE: One of Seattle's most popular food carts, the Creole-influenced Where Ya At Matt, is going brick-and-mortar with a restaurant on N. Fremont Street, in a space that was home the Buckaroo Tavern for more than 70 years. Chef/owner Matthew Lewis will open Roux, a spot that plans to serve breakfast, lunch, and "sexy comfort-food" dinners alongside a full bar. Projected opening: August. [-ESEA-]

SEATTLE: Good news for travelers who constantly suffer through layovers at Sea-Tac: Seattle Met reports that Pike Place cheesemonger Beecher's will open an airport location (in Concourse C, near the Horizon Air gates) serving up its famous mac and cheese, panini, and charcuterie. The location will also feature an outpost of Caffe Vita for good measure. Projected opening: this summer. [Nosh Pit]

IDLEYLD PARK, ORE: Road trip alert: Newberg's Painted Lady heads up the N. Umpqua River to the town of Idleyld Park for a one-off, multi-course dinner at the Steamboat Inn. The dinner, a collaboration with R. Stuart & Co., features courses like bacon-wrapped trout with cauliflower puree and lamb served two ways. Reservations are $85 per person and available by calling the Steamboat Inn. [EaterWire]