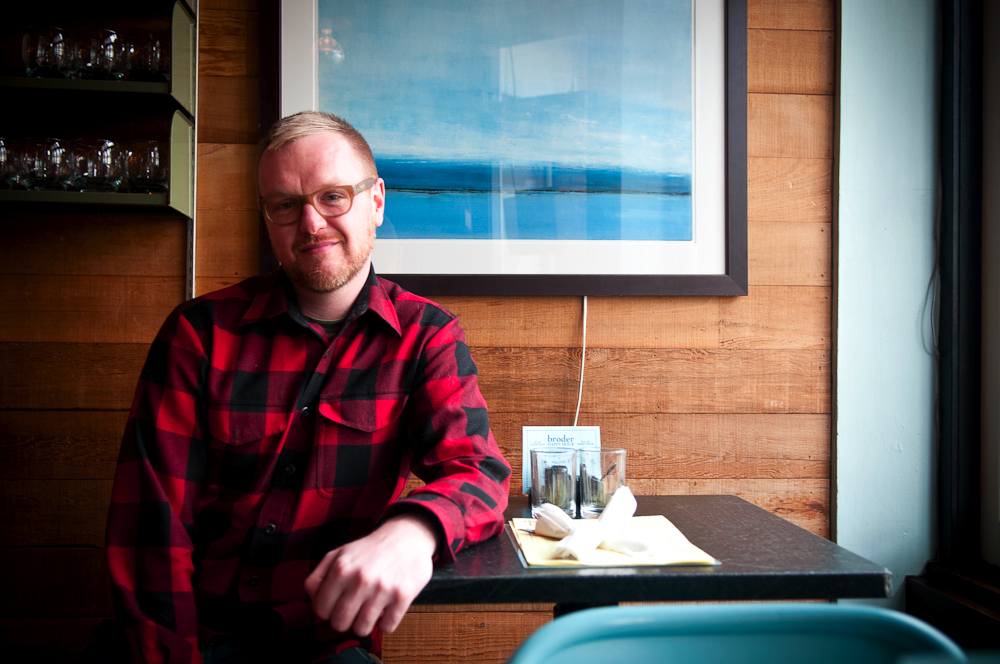 SE Clinton's charmingly funky and ever-popular Broder is renowned for its unique Scandinavian-influenced brunch, cozy quarters, attractive staff, addictive æbleskiver and of course, the weekend brunch rush. As the restaurant ringmaster, on any given workday general manager Joe Conklin might find himself in the role of boss, barista, server, therapist, troubleshooter, and/or, if need be, smackdown deliverer. Eater had a pint with Joe, and got the skinny on the reverse bribe, tight t-shirts, the perils of hungover brunchers, and which Broder staple makes the best companion into the afterlife.

What's the most challenging time for a waitophobic to come in?
Lately we've been busy every day, but obviously Saturday and Sunday are our busiest days. If you really never ever like waiting, then you might not want to come on a Sunday. Because we fill up fast and the kitchen gets all the tickets at once, the first turn is the longest — if you show up at 9:10am, you're going to be waiting for over an hour. I tell people to come right before we open, or between 10:30 and 11am, because then there's a little more flow.

Is there a way to circumvent the wait? Do you take reservations?
We only take reservations for dinner, because the restaurant is so popular and so small that it has to be first come-first serve, otherwise people walking by would never be able to come in. And we don't give wait times, because people will often sign up and then decide they don't want to stay, so they leave and don't cross their names off and we'll yell through 10 names but there are only actually four people there, so it's hard to predict — it could be 40 minutes, but it might be 10. It also depends on how long people stay at the tables. We say on the menu to please be courteous of other people waiting, but sometimes people wait next door for an hour, then come over and have a great time and pay their bill and sit there and chat and bring out the photo albums and gifts to exchange, and you're like, "But remember how frustrated you were that you had to wait?" It's a total balancing act.

Has anyone ever tried to bribe you for a table?
No. But I try to reward people who are really kind and patient and treat us like human beings. If I know someone has waited a long time, when they do sit down, sometimes I might send them a treat, especially if they have kids who are hungry. It's my way of saying thank you for waiting and for being so nice.

So, it's almost the reverse bribe, really.
Exactly. But seriously, it helps a lot when people are kind and courteous. We're going to do what we can.

Have you ever had anyone throw a real tantrum?
Yes. And that's where it's like, okay, you are going to see a side of me you don't usually see. I will not put up with it, and if someone who works for me is being mistreated in any way, I will give the smackdown.

I've caught customers getting really aggravated at an employee, saying, "But I thought you said this, or I thought you said that," and that's another reason we don't give wait times, because if you give someone a wait time, and you're wrong, they get upset with you. Some people will freak out and think they are being skipped — if there are two of them and five of you, I'm going to seat the twosome at the bar. I'm not skipping you, I just have a two-top available right now, not a five-top. And then there are the people who have a hangover — I understand completely, you're so hungry, you've been waiting for a long time, you've been drinking coffee, but it's not pretty for anyone when you're in that state. Sometimes you'll see people who are really hungover and you're like, "this is going to be messy."

Have you ever had someone throw up?
Yes. Right at the table?!? No no no! Not at the table, but all over the bathroom. One time, a woman was waiting outside and she looked really pale and she was shaking and had to sit down on the ground, so I brought her some ginger ale and then one of the other people waiting, a total stranger, drove her home. I was glad she didn't make it into the restaurant.

Tell us about your regulars. Any favorites or particularly memorable characters?
We had a customer who was 99, and when her kids came to visit her, they'd bring her in for breakfast, and she loved the æbleskiver. Then they came in without her a few times, saying she wasn't doing well, and one day a woman called for four orders of æbleskiver to-go, and when she came in to pick them up, she mentioned that her grandma had loved them so much. When I asked if her grandma was so-and-so, she said yes, and that she had passed away and she was buying the æbleskiver because they were all going to put one into her grandmother's casket — she was going to be buried with our æbleskiver because she loved them so much. I didn't really know how to react, it was emotional and very, very sweet, but it was something that had never happened before.

What about VIPs? Do celebrities come in and eat, Portland or otherwise?
We do have celebrities come in, but I don't allow my employees to go above and beyond how they treat anyone else, I'm not going to make people feel on the spot or uncomfortable when they're just trying to go out and have breakfast like a normal person. Most recently was the band Mumford & Sons, they came in and had an awesome time, and when they played at the Rose Garden, they mentioned Broder three times and talked about how much they loved it, and that was really cool. As for as local celebrities — Storm Large comes in, and Thomas Lauderdale from Pink Martini when he's not touring, and China (Forbes), and Holcombe Waller, the folk singer, he's the sweetest guy ever.

Your job involves juggling so many dynamics — do you enjoy that part of it?
I do enjoy it. I've always been a people person, and I could never have a job where I sit at a desk, ever. I love people and I love food so I'm kind of meant to do this. A lot of people think, "Oh you work in a restaurant because you have to," and that's absolutely the farthest thing from the truth. I don't subscribe to the idea of "You work in a restaurant because you can't do anything else." Sure, often times people are doing other things — they're in a band, or they're a designer, and they're just doing this for extra income, but this is my main job and this is what I do and I really love it. I work in a restaurant because I want to and I love it and I'm passionate about it. It makes me feel alive, and it's never ever boring.

Just curious — is it a requirement that you look good in a tight t-shirt to be hired at Broder?
It's not a requirement, but it does not hurt. Everyone there is pretty cute, it's true. But that's not the reason they're hired — they're also really talented and hard-working. A lot of people do comment on that though.

What's your most important Gatekeeper tool?
It's something I was taught as a child by my parents — they are amazing people, and very, very hospitable, and being thoughtful is something I learned (from them). I want every person who comes to Broder as a guest to feel at ease, comfortable, welcomed, and respected. You want people to feel like you're out to take care of what they need, and part of that is knowing what they need before they even know it.

And finally, how many aebelskiver can you eat in one sitting?
If I haven't eaten already, if I'm not having them for dessert, I can eat a whole order, which is six. But I've never actually tested it.