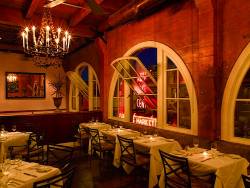 SEATTLE—Two major upcoming closures to announce up in the Emerald City: Eater Seattle reports that Elemental@Gasworks, an Eater 38-approved spot, will close in late June. The intimate Elemental (which features just five tables and portable burners) opened in late 2004 to largely positive reviews, but co-owners Laurie Riedeman and Phred Westfall tell ESEA that their lease is up, and have decided to "to explore new challenges." Meanwhile, in the Pike Place Market, Chez Shea, a market fixture for the past 30 years, has announced it will also shutter — recent reports set the closing date as April 29, and a new tenant has already emerged for the space. [-ESEA-]

TACOMA—Just in case you happen to be passing through Tacoma, Seattle's little sister to the south, the city is currently celebrating its first-ever Restaurant Week, spanning from now until April 26. More than 25 spots are offering three-course prix fixe menus for $25 (or $15 during lunch), and the full list of restaurants (and their menus) is available here.