Share All sharing options for: Morso's Giambalvo Prefers His Meals "Naked" at Yoko's 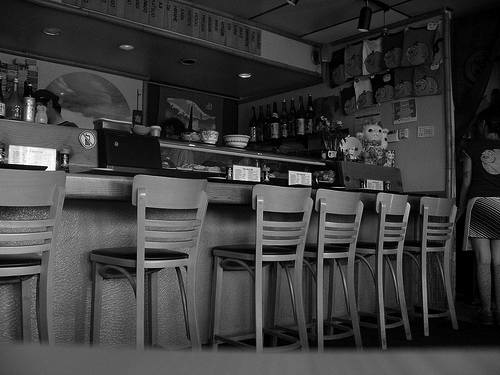 Kenny Giambalvo has been cooking in fine dining restaurants for more than 34 years, creating dishes that mix his Italian heritage with classic French training — most notably, beginning in 2000, at the Pearl District's Bluehour. In April 2011, Kenny left Bluehour to spend more time with his two young daughters, but Giambalvo has since returned to the restaurant biz and partnered with Mio Gelato founder Bob Lightman and SurveyMonkey founder Ryan Finley to create a new European-style neighborhood spot, Morso, opening soon in the Pearl. "Given the fact that I now have two small daughters at home and only one night out of seven in which I can have a real 'date night' with my wife, it is safe to say that I don't get out much," Giambalvo says. "[But] my wife suggested Yoko's on SE Gladstone Street not long ago, and we have been back several more times since."

Yoko's delivered on several points; the quality of the seafood was indisputable, our server asked the right questions, got our order in as quickly as we were prepared to commit, and then with a very dry sense of humor, engaged us throughout our dinner to make sure everything was going according to our plan. The total cost for this lovely dinner for two was surprisingly inexpensive considering how much we like our sake.

The reason why so many of us chefs prefer to eat at Japanese restaurants is that we like our food naked or as close to it as it can be. The food culture of Japan is just that; quality ingredients served at their peak, with just the right amount of ingredients to bring out their greatness. Nothing matches perfectly fresh fish handled by a skilled sushi chef. At Yoko's this culture is evident in their menu and how the cooks prepared each dish. The nigiri, sashimi, hot and cold appetizers were all thoughtfully presented and super fresh. No big surprises on the menu but each dish we have tried was enjoyable. Yoko's won't change your life, but it sure does provide for a memorable dinner experience that doesn't break the bank, and we still had time left in the evening to have after dinner cocktails at another of our favorite watering holes, Wafu.