Otto's Kim Stanton on a Quiet — But Fun — First Year

Share All sharing options for: Otto's Kim Stanton on a Quiet — But Fun — First Year 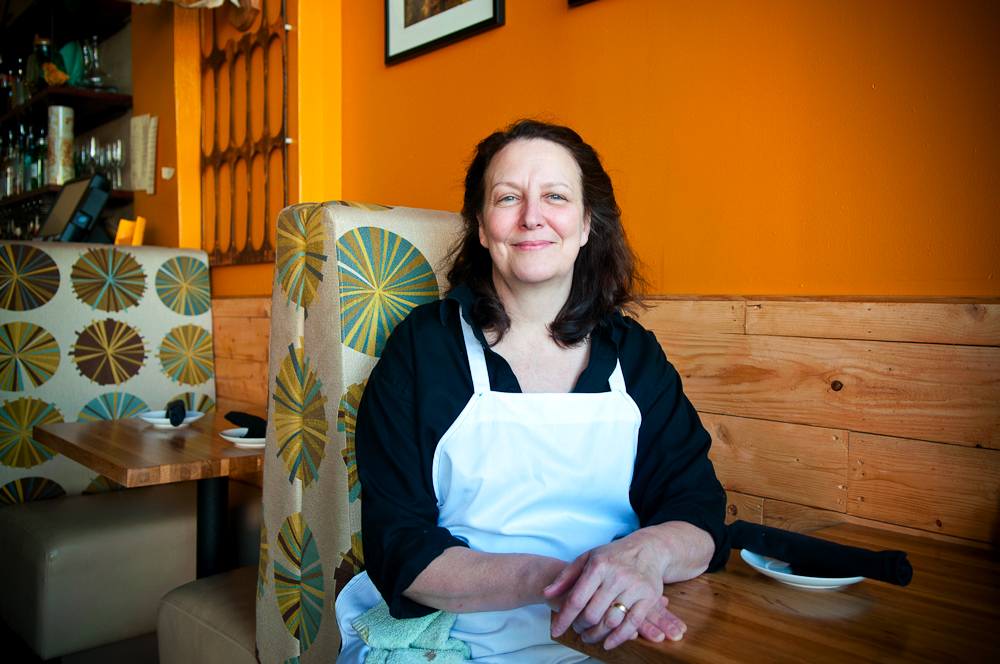 Michigan-based chefs/restaurateurs Francis and Kim Stanton have had a whirlwind romance with the city of Portland. After spending holiday vacations in Portland — complete with their restaurant staffs in tow — for several years in a row, the Stantons paid a consequential visit in 2011, dining at the short-lived (but well-loved) restaurant Fin. "We had dinner right here," Kim Stanton says. "A week later, this business broker calls us and says, 'Have you ever heard of this little restaurant on Hawthorne called Fin?' And we said, 'Yeah, we ate there last week.' He goes, 'Well, it's for sale.' So, I put my husband on a plane, he came back — we bought it."

The Stantons' globally influenced Otto opened in April 2011, and despite consistently positive reviews, Stanton admits that the family-run restaurant doesn't support them financially — to augment, the Stantons purchased condos in SE, turning them into vacation rentals, and Francis will soon open a SE vintage furniture shop specializing in mid-century modern pieces. "We keep busy," Kim says. "If the restaurant was busier and I could hire more, I'd be happier. Because you can help people be creative, have a living... it's nice." Eater chatted with Stanton about the spontaneous Portland move, slow Saturday nights, and becoming part of a community.

Let's go back to 12 months ago when you first purchased the space — what were your original conversations about the concept like? Not knowing your previous restaurants in Michigan, did perspectives or the concept shift a bit once you got to Portland?
Not really. We cook the food that we like — we take our influences from all over. Some people have criticized us that [the menu is] schizophrenic, but isn't the United States just the melting pot of all cuisines? I've cooked with my friends from Ethiopia, a woman that I knew for a long time, her mother-in-law would come from India and we would cook together — you get influences from everywhere. And it's interesting to say, "This is really delicious and I want to share it with somebody else." So, that's pretty much what we do. People like us. Just not enough of them. They blog us well, they Yelp us and say nice things; we have people that come here on a regular basis. So, I don't know. Maybe it takes time in Portland — there's a lot of choices.

That's one of the things you hear the most about this restaurant, this perception that you're "under-the-radar." But you don't seem worried about that at all.
I'm not worried, because life closes doors, opens windows all the time. We have chefs that come and do these pop-up dinners with us — we have a ball. We have an absolute laugh riot. But what's interesting to see is: Daniel DelPrado did one with us, and he's at the RingSide Fish House right now. But his experience here, doing the pop-up, he would come in on Friday and Saturday nights and do charcuterie with Francis, and he would watch as you get maybe a half a dozen tables on a Friday night — which is pretty darn sad. And he goes, "This is scary." And I said, "Yeah, that's what owning a restaurant is." Every day you pray you're going to make enough money to pay rent this month, hopefully you take care of your staff, but yeah, it's a risk.

Lots of the early reviews really harped on that — saying "we love the food, we love the experience, but there's no one here." Did that bother you to read, or trigger an idea that you should try something different?
No, we've always been open to working with other people, cooking with other people, sharing what we have — which is an open restaurant. I mean, why not? If we can share it with other people and stretch themselves and explore their talents, we love it. And I don't care if they're young chefs, old chefs, it's fun.

Think back to a year ago, how did the opening go?
I wasn't here. [Ed note: Kim Stanton remained in Michigan until June.] Francis kept a journal — I think it was slow. They thought it was going to pick up, and it just didn't, to the point where — my kids are used to working in busy restaurants, because we've always had busy restaurants — but my daughter went and found another job. Any of the staff that we hired, whether it was kitchen staff or front-of-house staff, they went somewhere else, because they weren't making enough money. Which is kind of sad; we wish we could support more people. But it is what it is. You can't force it.

Looking back, is there anything you'd change about the opening?
I guess had we researched it and not been so spontaneous, maybe we would have picked a suburb to open up in, so that you're a bigger fish in a smaller bowl. Here, it's just very diluted. So, maybe our marketing wasn't that great, but I think this is still a good spot. I love it, we're in the neighborhood, we have fun.

Speaking of the neighborhood, tell us about your regulars.
It's some neighborhood people, [but] we get people from all over. We get people from the Northwest, who live in our neighborhood... we get people from right behind in Ladd's Addition. We get a lot of nice people, and we love it. It's neat to walk through the wine list with somebody that you know wants to learn about wine; and it's also nice to wait on people — we've got this one guy who brings in bags of wine out of his cellar, that are wines that, oh my gosh, don't exist anymore. It's phenomenal. And we let you taste them — really sweet man. It's really nice.

Let's say you're talking to a diner who's never been here before. What are the must-have things on the menu?
When somebody asks me that at a table, unfortunately, I'm not objective. Because Francis and I make the food, we put the food on the menu because we like it. So I just tell them to throw a dart. Throw a dart on the menu, you'll come up with a good meal. We do have some items on the menu that are there because they're popular with people that perhaps wouldn't be our choice: zucchini fries. They are wildly popular, so why would I take them off the menu? It was just one of those quirky things we did one day and people like them. I don't know why.

Other top sellers? I would guess that sausage blintz is one of them...
Sausage blintz is good, but it fell off in sales and it's off the menu right now. It was really hot. It might come back; things comes back in rotation, and if people holler at you, you do what they want. It's like — for example, Sunday nights, we're not open, but if someone calls and says "Hey Kim, I wanna bring some people over Sunday night," Francis and I will come in and open the place up. So, we do pretty much anything.

So if you were to appeal to the Portland diner right now, what would you say?
I don't know... that's a hard question. The restaurant was named after my dad, and my dad always supported all of us children. And to honor him, I'd like to support others. I'd like to have the opportunity to support others. I would like this restaurant to be an integral part of the community: We support the schools, anybody that asks us for a donation, we give it to them. I don't know, I'd like to see it thrive and grow, and honor him in some way. And you know what, if it doesn't... it doesn't. But it'd be nice. He was such a neat man. He was generous and funny... his famous phrase was, "Life is fun if you let it be." So we're just letting it be. We'll see if it turns out to be fun. That's what he's instilled in all of us. So, it's made us resilient. We'll roll with the punches.

And finally, does it feel like it's been a year?
No, because I haven't even been here a year. Francis feels like it's been 10 years. [Laughs] No, it went by really fast. Really fast. We always build our businesses in Michigan by word-of-mouth. It just happened faster than it did here. There is not a day that goes by where people say, "So, are you new here?" By Portland standards, we're still new: Wander in. Have fun. We're here.