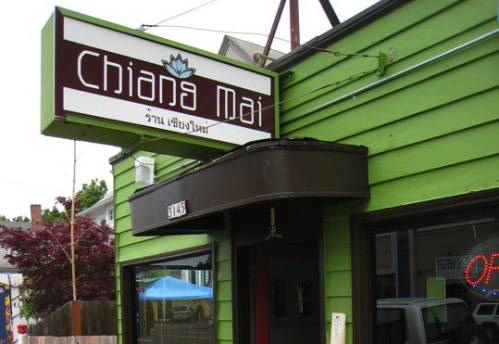 With an extensive background in French cuisine, chef Adam Higgs was hired at L'Auberge as executive chef in 2000. After only a year and a half, he was offered up the chance to partner with New Orleans native Bud Deslatte to open Acadia Bistro in the Irvington/Beaumont neighborhood. (Adam bought the restaurant from Bud in 2004 and has been managing it and working as the executive chef ever since.) But for Higgs, one particular Hawthorne neighborhood Thai restaurant holds a special place in his heart. "When I lived in SE Portland, Chiang Mai was just a few blocks from my house," Higgs says. "I've since moved a little further away, but that's not going to stop me from visiting because the food is just so good."

In terms of go-to dishes, I HAVE to get the Khao Tod Naem Kook, which is this wonderfully crunchy mix of sour pork sausage, crispy rice, chilies and peanuts served with lettuce for wrapping. The sour pork lends a wonderful tang to the whole dish. It's perfection in every bite: salty, sweet, sour, warm, cool and crispy.

I'm also pretty darn addicted to the Miang Kam, which is another tasty little assemble-your-own-bite. Only this time, you take chapku leaves and fill it with fresh ginger, roasted coconut, Thai chili, lime, shallots, and dried shrimp. It's a flavor party in your mouth! I will venture to say that Chiang Mai also has the best Khao Soi Gai in town. It's chicken drumsticks simmered in a Northern Thai curry noodle soup with egg noodles, some pickled mustard greens, and lime.

The Thai were also doing the "put an egg on it" thing way before Portland, but I have to say, that I will order just about anything at Chiang Mai with a fried egg on it. Any dining experience where I can crack a yolk is heaven for me. The place is bit more upscale than your average Thai restaurant, but the atmosphere definitely reflects the quality of the food. I'm leaving for Paris in a few weeks, but guaranteed this will be my first stop when I get home. In fact, I may need to make a pilgrimage there before I go after describing all these dishes.