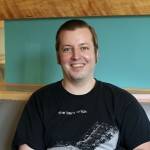 PoMo is the first to learn that the Bent Brick's Adam Robinson, a two-and-a-half-year alum of Scott Dolich's restaurants, has been named the new bar manager at Eastside Industrial spot the Rum Club. Robinson officially makes the switch in June — when he'll implement a "Classic Cocktail of the week" chalkboard special — and shake-up the Rum Club menu in a collaboration with owner Mike Shea. Current Bent Brick bartender Connor Mansager will step into his former role at the Bent Brick. [Eat Beat]