Share All sharing options for: Bazi Bierbrasserie's Hilda Stevens on the First Year 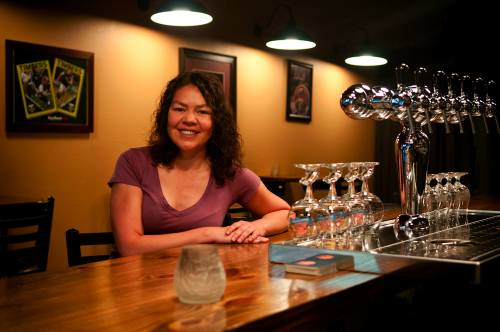 When Bazi Bierbrasserie proprietress Hilda Stevens signed on the dotted line to take over the Café Magnolia space last March, she had no idea she'd be laid off from her longtime high tech industry job mere hours later. Suddenly losing the luxury of an unhurried timeline, Hilda jumped headfirst into an ambitious DIY buildout, and on May 27, her Belgian beer bar opened its doors at SE 32nd Avenue and Hawthorne. One year later, Hilda talked to Eater about blazing her way through the permitting process, 90-hour work weeks, secret curry mayo, why size does not matter when it comes to Belgians (beers, that is), and how her first year can only be described as "Stoemp."

How did Bazi come to be?
I come from your typical immigrant blue collar family, my dad was a dishwasher and a cook, my mom did the same, I worked in the industry in high school and while paying my way through college, and it was always my passion to open my own place once I had the money saved up. Originally, my concept was a European bistro — I was born in Guatemala, and my family is of Spanish and German descent, so I always knew I wanted to bring that part of my heritage into my own restaurant, it was just a matter of defining my concept. But when I started talking to industry folks here in Portland, everybody kept talking about Belgian beers, a lot of the microbreweries were starting to play around with Belgian styles. I'd traveled extensively throughout Europe, and spent a lot of time on the East Coast for work, where Belgian beer cafes are just like a Stumptown or Starbucks here — everywhere. The more I talked to people about it, the more I thought Portland might be ready for a Belgian beer bar. My original thought was that I would keep my second job while the business took off, but it didn't work out that way. Ironically, the day I signed on this location I also found out that I was being laid off due to the economy. I'll never forget picking up the phone and telling my dad, "I just got laid off," and his response was "Well, I guess you're about to learn what it's really like to be an entrepreneur."

No more safety net.
There was no more safety net. So I called a meeting of the minds, I brought in Eric (Bottero, Bazi's GM) and a bunch of friends, and said ";Okay, I no longer have the flexibility to take my time with the buildout, we have 45 days to get this place open." I took the experience I had from working in government communications to finish filling out all our applications — the OLCC permit, the health department permit, and rather than waiting six months for the go-ahead, I was hand delivering documents, asking what was missing and what I could do to expedite the approval process. I was pretty lucky in that this location already had a liquor license, so I just had to go through the initial background check, and within 45 days of filling out the paperwork, I got my approval. That was really exciting.

How did the buildout go?
A lot of sleepless nights is probably how I'd describe it. We'd wake up at 7am and didn't finish for the day until 2am. The kitchen was already done, so that made our buildout easier because that's where a lot of the licensing and permitting takes place. We wanted to make the bar the focal point of the room, because we were importing an authentic draught system from France like the majority of Belgian beers bars use, which allowed us to achieve the size of the head that some of our beers need to have when they're served. The existing bar top didn't work, so I started looking at reclaimed wood, and the company we were working with called one day and said "We think we found what you wanted within your budget," so our bar top is the old wood floor from the Jim Beam Distillery in Kentucky. It's fun to say we have a little piece of history sitting at the bar.

If we went back in time a year, what were you thinking on opening day?
Opening day is a total blur. The night before we opened, one of our carriers had lost
one of our draught towers, so we were less than 24 hours away from opening and one of the key components of a Belgian bar was missing. And we had so many things that
still needed to get done, the neighbors were looking in the windows and we were still
painting and rearranging and they said, "Are you sure you're opening tomorrow?" It was very hectic. I think the reality probably hit after we closed that first evening, when we all got to sit down, and I was able to have a glass of beer and say "Oh my gosh, I can't believe I just did this, this is what I'm doing now."

How did the neighborhood receive you?
I made a point to go knock on doors and introduce us and let the neighbors know what
we were doing, and a lot of them were really excited and very supportive, we had a lot of people coming in saying "We want you to be successful, what can we do to help you?" I had no marketing budget, so I asked them to eat and drink here and if they enjoyed it, please tell their friends. I think if it hadn't been for the community embracing us early on, things probably would have been different, we were lucky to get neighbors like that.

Did any authentic Belgians — people, not beers — find their way to you?
When I was first evaluating the Belgian concept, I tried to find a local Belgian
community and I couldn't, but within a month of our opening they found us. The first Thursday of every month there's a core group of 8-10 that never miss, and as the weather gets better we'll have around 40. It's so fun — Belgium has so many German, French, and Dutch influences that you'll come in here and hear five different languages being spoken. They've been a great source of feedback, too. Belgians dip their fries only in mayo, and one member of the group is a chef and he gave us great feedback about what we needed to change about our mayo, so it would taste just like the ones in Belgium. From that feedback we also created a curry mayo that has become our secret sauce, we don't always advertise it but people who know will ask for it and we'll serve it with our fries.

Does it feel like it's been a year?
It feels more like five years. When you're opening a restaurant everybody tells you to be ready because it will be the most you've ever worked. I worked in high tech where I was putting in 80 hours a week plus travel time, and now I'm working 90 hours a week in the restaurant, plus I'm the accountant, I'm the bookkeeper, I'm the marketing person, I'm the event planner, and when my servers can't show up, I'm also a server. And I like to pretend I'm a bartender.

Right before I opened, one my mentors said that in this industry the people who are successful are the ones that can deal with the evils that can show up, like people stealing from you, people drinking on the job, and people doing drugs, and they said to be ready to encounter at least one of them in my first year. And I actually encountered all three my first year, so I'm hoping I got that out of the way and the next year is going to be easy sailing.

If you had to sum up your first year in one Belgian word, what would it be?
In one Belgian word — let's see, I know a few, but some of them shouldn't be published. I'd say Stoemp, which is one of our most popular dishes. It means a "mixing of ingredients," because that's what we've had to do in the first year. A mixing of everything, trying to find out what works, what doesn't work, what people get excited about, what beers to bring in next, what new beer cocktail to create. We've evolved from specializing in Belgian beers to coming up with creative and new ways to always keep our customer base intrigued.

Finally, can you say Bazi BierBrasserie five times fast?
[Aces this without hesitation.] I guess I can!

What about after three glasses of Straffe Hendrik Bruges Tripel?
Maybe the tripel, but not sure about after the quad. Because the quad is 11%. I always say with Belgian beers, size does not matter.