Morgenthaler Likes His Burritos with a Side of Strippers

Share All sharing options for: Morgenthaler Likes His Burritos with a Side of Strippers 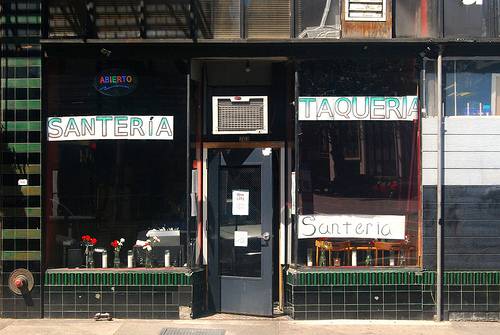 Bar manager Jeffrey Morgenthaler is the man behind the drink menu at Clyde Common, one of Portland's most buzzed-about bars. No stranger to innovation, Morgenthaler has been on the forefront of both the barrel-aged and carbonated cocktail trends, and his crafty ways have garnered him national attention (see here and here). But after a well-shaken evening behind the bar, Morgenthaler turns his attention to a couple other downtown favorites.

"More often than not, we're so busy behind the bar that none of us has time to take advantage of a staff meal. One thing we do late at night, from time to time, is hit our favorite combo of downtown establishments — Santeria on SW 7th and Ankeny for some Mexican food and [the legendary strip club] Mary's Club next door, where I love to sit at the bar and catch up with their bar manager, Tracy. So, to anticipate soaking up a couple of beers and a shot next door at Mary's, many of us from Clyde stop by Santeria for the enormous carne asada burrito. At this point it's legendary among the Clyde bartenders, we get it so often. I've worked in every sort of bar imaginable and have a deep affection for Mary's. I did a guest bartending shift there last year and I was the first male in 35 years to work behind that bar."