Share All sharing options for: Screen Door's Mouton on Those Ridiculous Brunch Lines 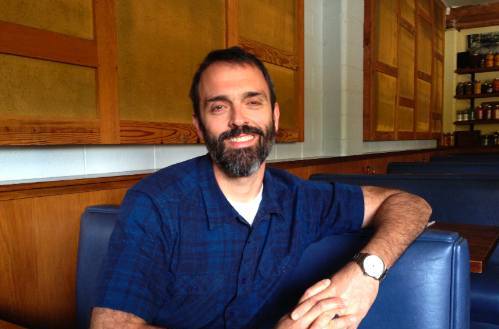 In a land where mile-long brunch lines scarcely raise an unmanicured eyebrow, Screen Door commands the most formidable of them all — a three-deep, corner-turning human chain that could prompt the uninformed passerby to suspect an indie label fitted hoodie sample sale lurks within the humble cinder-block walls of this unflaggingly popular Southern restaurant, as opposed to a kitchen full of overworked deep fryers turning out plate after plate of some of the city's most coveted fried chicken 'n waffles.

Front-of-the-house man David Mouton, who opened Screen Door nearly six years ago with his wife Nicole, has faced the brunch hordes many a weekend, and he gives Eater the dish on the Portland public's unflappability in the face of daunting waits, the wisdom of the pre-brunch, how it sometimes works out to hire the guy smoking a cigarette outside your restaurant at 4a.m., and whether or not Paula Deen could cut to the front of the line.

What is the absolute worst time to come a'brunching on Sunday morning?
9:15a.m. Because we're full by 9:10, and you're going to be waiting the longest at that point. That first seating is always pretty intense, we fill up immediately and you're guaranteed to be waiting at least an hour. That being said, I want to crush the myth of two-hour waits at Screen Door because that rarely happens. The only time that happens is when somebody shows up at 9:15 with a 13-top, then it could potentially be two hours, yes. But at the worst, our average wait for parties of six or less is probably an hour and 15 minutes; for two-tops, an average of 25 to 35 minutes, occasionally longer.

How do people react when you tell them the wait?
Brunch is such a phenomenon in Portland that I think the general public understands what's about to happen, so they show up knowing they've potentially committed the whole first half of their day to brunch. Which I respect, it's great, but it's always amazing — you'll have a list a mile long and you tell people it's going to be an hour and a half and and it's absolutely not a problem at all. And they've come prepared — I've seen customers that are on the wait list here eating next door at the coffee shop knowing they'll be hungry again in two hours.

Let's talk about that infamous brunch line. What's the earliest someone's lined up, and how far have you seen the line stretch?
Probably 8 o'clock, aside from Mother's Day and Father's Day. 8a.m. is normal, there will be people who pass by earlier, people who drive by and stop at the door, but then they'll leave. The farthest I've ever seen was from the door, around the corner, and almost all the way to Couch Street.

Were you this popular in high school?
No.

Is it a nice change?
It's funny, and it's validating. It validates everything our staff and my wife and I do. That's what makes it worth doing. A few years ago, I was driving to work after we'd already opened, my wife was working brunch, and it was a beautiful Portland summer day, and the place was just surrounded — people sitting on the sidewalks, people sitting across the street, people sitting on people's porches. It was scary crowded, and I thought, "Whoa, this is nuts." And then I noticed it was all the coolest people in Portland and I just kind of laughed to myself because I am nowhere near being a cool person, so I found it kind of ironic that our restaurant was so popular amongst the hip set. Which is great.

How do the neighbors handle the weekly hullabaloo? I noticed the house next door is for sale?coincidence?
I don't know, the For Sale sign just went up. When we first leased this building it was empty and full of graffiti and an eyesore, so we were enthusiastically embraced by the neighborhood. They showed up in droves, and that really got us through the first year. As time's gone on and we've gotten more popular, I understand that it does get a little old for them on the weekends and I'm sure they get a little frustrated, but they understand that it's kind of a necessary evil when you live on a commercial street like this. I don't get many personal complaints from neighbors, I've had one lady walk in a little frustrated and ask if I could find out who's blocking her driveway, and that's really it.

We have great relationships with our neighbors. One of our employees, Kevin, lived across the street for a while. I was here at 4 o'clock one morning before we opened, trying to figure out where to hang a sign, and he was on his porch smoking a cigarette and he was like "Hey dude, can I have a job?" And at first I thought, I don't know, should we hire a guy who lives across the street — what if he sucks and we have to get rid of him? Six years later, he's still here. It worked out great.

What is your celebrity policy? If Paula Deen showed up, could she cut to the front of the line?
Probably not. It's always a tricky situation with celebrities, because a reality in their lives is that sometimes it's inconvenient for them to be out in public. There are a handful of regular customers who are local celebrities that we allow to call ahead and get their table because it's uncomfortable for them to hang out in line. So, it's not about being unfair, we're extending a courtesy to someone who was already a regular customer. But for the most part, no matter who you are, you're waiting.

Some of your brunch dishes are local legends, i.e., the fried chicken and waffles. If you had to name your three favorites, what are they?
The chicken and waffles is everything you want in a gluttonous brunch, it's soul-satisfying, and it's enough food for dinner later that night too, so I have to tip my hat to that, obviously. Matthew, our current sous chef who runs brunch, his vegetable hashes are always wonderful, especially when he's doing smoked vegetable hashes. Jared, our lead line cook at brunch, created a Croque Madame that has become really popular. It's essentially a ham sandwich on a sourdough roll with cayenne bourbon Mornay poured over it, then it gets toasted and they put eggs on top. It's delicious. It's stupid good. When they put them up I walk away or I'll eat the whole thing. My wife's been eating the Croque Madame every weekend for the past four weeks now.

Your staff always seems to be of above average attractiveness. Accidental or strategic?
Accidental. I hire all the front-of-house staff, and I hire staff who I feel are the most genuine. That's my basic criteria. I don't hire on anything but the personal vibe I get from someone when I sit down and talk to them. Even experience isn't that important to me — I'd rather hire someone who really enjoys serving people and likes being in restaurants. Our staff is very fit, but I think it's primarily because of working here — people ask us how we stay so skinny, and it's because we serve 2,000 people a week, we have to keep moving.

So it requires stamina to work the Screen Door brunch.
It's an athletic event, and we take it very seriously. Our staff does not come to work hungover, they just won't do that to themselves or their co-workers, because we're serving an immense amount of people a day, and it's nuts. You can't get through it if you are hungover or you didn't get any sleep that night. But it goes fast, and it's very rewarding.

What is your most important Gatekeeper tool?
Patience. And understanding. A lot of times you forget what it's like to be that customer, and you shouldn't assume that people are going to understand your plight. Some people don't go out to eat a lot, and haven't worked in the business, and it shouldn't be taken for granted that they should "get it," so to speak. So it takes patience and understanding, and clarity and communication. Letting people know the truth, taking the 10 seconds to really think about the answers you give people regarding expectations and wait times, and then communicating from that point forward and giving them updates, not just taking someone's name and forgetting about them. We don't let anyone work the door here who isn't a grownup.
· Screen Door [Official site]
· All Previous Screen Door Coverage [Eater PDX]
· All Previous Gatekeeper Coverage [Eater PDX]