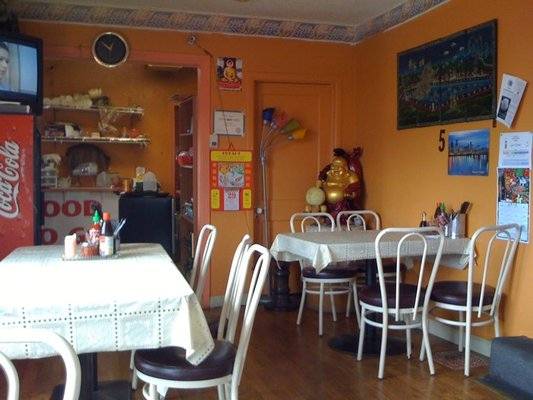 Portobello Vegan Trattoria's Aaron Adams started his culinary career as a dishwasher and "salad bartender" at, of all places, a steakhouse. "After that I knew I wanted to work in kitchens," Adams says, and followed-up the experience with stints in Seattle, Guam, Miami, and New York, working at Park Avenue Cafe for three years and becoming the (again, meaty) saucier. "That was a hard yet incredibly rewarding job. Along with the 40 gallons of chicken stock, 10 gallons of veal demi, veal consomme, lobster stock, crab broth, soups, savory flans, and a million other sauces I produced daily, I also got to make most of the charcuterie, from foie gras torchon and pig's head terrines to rabbit ballontines."

Adams moved to Portland in 2003. "I bummed around for a bit, got into cycling, then BAM! I went crazy and went vegan," he says. "It was a pretty radical change from where I was before, but once you see what's going on in the meat industry and you decide you can't deal with it ethically, you really can't go back." And when Adams' is not running Portobello — which moved into its current digs on SE Division in 2010 — you can find him up the street at a Van Hahn.

Unknown to many outside the Vietnamese, Buddhist, or vegan communities is a little gem in the rough that is probably never going to be polished. Van Hahn Vegetarian Restaurant isn't exactly a nice place. While much of the food is delicious, the service is abrasive... you should probably bring your own bottles of water if you're thirsty, your server probably won't understand exactly what you want, your server is probably also your cook and will disappear for 20 minutes at a time, and the place is... well, a bit untidy. But I can't see a nicer time than taking a leisurely bike ride out to SE 84th and Division and settling in for a mock-meat-o-rama. The place is run by a group of Buddhist nuns. And these ladies are fake meat specialists. They are not exactly interested in catering to your every whim, they'll serve you up some delicious "Lemongrass Chicken" which turns out to be a tofu and rice noodle "breast" with a gluten "skin" skewered by a lemongrass "bone." All this smothered in a light curry. Sounds weird? Gross? Well, maybe... but delicious.

Other mock meats pale in comparison to the chicken, but there's some winners...the steamed buns are a particular standout. While I try to refrain from mock meats as a vegan, sometimes I just gotta get some barbeque gluten "spare ribs." The place is notorious for gruff, apathetic, or absent service. Whatever. I just bring my jug o' water, some good friends to talk to, and some patience and kick it in the sun on their patio overlooking the dirt and gravel parking lot. Heaven!