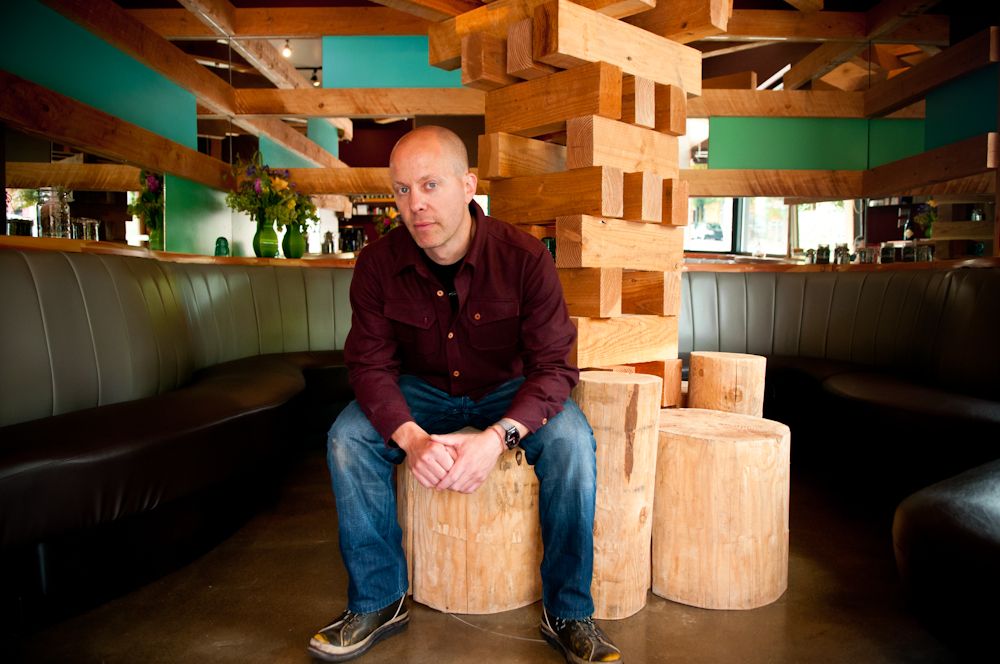 For eight years, Park Kitchen chef/owner Scott Dolich was content serving diners the reliable and celebrated ingredient-driven cuisine that has made his cozy, enduringly popular North Park Blocks restaurant a Portland dining scene mainstay. Then, early last summer, facing a surplus of kitchen talent and the serendipitous availability of his biggest Portland building crush, Dolich opened his unique version of a tavern in an off the-beaten-path Northwest Portland nook, brought in molecular gastronomy-leaning PK sous chef Will Preisch as executive chef, and the Bent Brick was born. A year later, Dolich talks with Eater about opening day out-of-body experiences, the challenges of raising two very different restaurants, why you'll probably maybe never see a Bent Brick burger, and how a second restaurant is better midlife crisis material than a Ferrari.

What made you decide to branch out last June and open the Bent Brick?
There were a couple of things. The first was that I had a lot of talent at Park Kitchen. The economic downturn meant that cooks were sticking around, so I had David Padberg, Will Preisch, Dave Briggs, Kris Komori, all these really talented, talented cooks, guys who are all better cooks than I am, at Park Kitchen, and nowhere for them to go. Number two, I knew this building was going to come available. This is a building I've been riding past between my house and Park Kitchen every day for the past eight or nine years...

And you had a crush on it?
I had a building crush on this spot for sure. I knew the owners, Zac and Seth Longaker from Oddball Shoes, and I'd told them, 'If you ever want to get rid of the building, call me,' and they called. So I had a glut of talent, the building was there, and I was at a point in my career where I wanted a different challenge. I had the capital to do it, the talent to do it, the space was available... Boom. Impulse buy. Midlife crisis.

How did the buildout go?
The buildout was awesome. The bones of this space are great, we didn't really have to do much. I knew I wanted to bring Mark Annen in on it, he designed Park Kitchen and a number of other restaurants in town, so he and I collaborated and probably within only two meetings, we had the whole thing basically mapped out. I hired Don Trotter from Oregon Restaurant Equipment to do the buildout, and he's just an animal — he took it from a shoe store to a restaurant in 90 days. We started building it out in March and it was done on June 1. We were actually trying to catch up to Don. It took us a while to make sure all the staff was in place and that we were ready to open the doors and get a great product out.

You've explained why the Bent Brick's location was special to you, but it's somewhat off the beaten path. How has that worked out?
The location's been really interesting and challenging. I love it, because I'm a big fan of slightly off-kilter locations. They create a bit of an urban oasis and that act of discovery is neat for people, when they walk in and they're like, "Where am I, I've never been to this neighborhood before, I didn't know it was here." But it's been challenging. Although it's an awesome neighborhood and the neighbors have really liked us being here, we even have regular customers from Park Kitchen, in the Pearl District, who still don't even know that we're here. So we've had to do a little bit of shouting to let people know we're here.

What were you thinking on opening day, any particular moments of joy and/or terror?
It was the same out-of-body experience that I had with Park Kitchen. It's very exciting and it's scary, almost a feeling of helplessness, because you don't know who's going to come in and how it's going to be perceived. I have very focused visions of what my restaurants should be like, and I usually don't stop to question them except for times like opening day, when you've got all this stuff in place and then suddenly you're like, "Jeez, I hope people are actually going to like it." Yes, there's a little bit of terror, but ultimately it's really gratifying to see the result of all that hard work and to see the staff really jazzed, to have food actually go out, and to interact with guests. It's also a relief, because you spent the last three months basically hemorrhaging money, and then all of a sudden the doors are open and you can finally see that this thing can pay itself off, and that's a huge, huge sigh of relief.

Was it hard juggling two restaurants in the first year?
Totally. One of my mentors, Loretta Keller down in San Francisco, recognized early on that I was going to be in the industry for a long time and probably have my own restaurant, and she told me that the fastest way for you to stop cooking is to own a restaurant. Which I kind of laughed at and discounted, but she's absolutely right. If you're going to own a restaurant, cooking is only a part of that. A big part, but only a part. When I opened up the Bent Brick last year this was driven home even further, because I had to split my time and step back from the kitchen, which is my first love. But that's the next stage for me, to train good cooks and provide a platform for them.

Considering your reputation at Park Kitchen, there were high expectations for the Bent Brick. What did you feel like the overall reaction was? Because it's a very different restaurant.
It's completely different. I think people were expecting it to be more like Park Kitchen, but I wanted the Bent Brick to have its own identity. A lot of people compared it to Park Kitchen when they came in, they said, "The style is different, and are we going to get the chickpea fries, and how come we can't get a beautiful bottle of Spanish wine?" But I wanted to separate the Bent Brick, and that's why I originally had the vision that it would be a tavern. And that's been a huge growth curve for us, because at the end of the day people wanted more food, they wanted less of downscale atmosphere and more of a traditional restaurant, so w'eve been adapting to that.

Before you opened you told Eater the Bent Brick was "a bar, a tavern, not a restaurant." How would you characterize it now?
We're evolving more towards being a restaurant, but it's a hybrid. The set-up of Bent Brick is that of a tavern — the bar is front and center, it's kind of loud, it's boisterous. I wouldn't call it a bar anymore, but I think it's always going to be that marriage of a tavern and a restaurant in that the food is fairly adventurous, and it's always going to be in one form or another.

Some diners have said the food is more adventurous than they anticipated, they expected a burger but instead there were mussels on rocks.
The biggest growth curve for the Bent Brick has been expanding to people's expectations. You can't discount them. Like I said, I have a vision for my restaurants when I start them, and then they take on their own personalities, they're like kids. I don't create the plates here, they are Will's plates, and we sit down every week and go over them and I act as a filter for Will because he is very adventurous, he doesn't back down from his own style, and he's really creative and method-focused. And with food that's adventurous and technical like Will's, you have to be asking yourself all the time, "Is it delicious, is this better than it would be if you just put the ingredient on the plate?" We're never going to please everybody, but the people who do walk into the restaurant, we make every last effort to make sure that they're happy. But believe me, I get asked once a week, "When are you going to put a burger on the menu?"

What are some of your most popular dishes?
People go nuts for the smoked salmon poofs, and the mussels with green strawberries, and Will's pine gnocchi dish — Parisian-style gnocchi with pine, smoked mushrooms, and asparagus, it's really delicious, one of those dishes you finish and order more of. And the pork fried rice was super popular, my kids couldn't get enough of that one.